It was a windy week that the floating rescue boat garage survived with flying colours. The far east pontoon was not so lucky, breaking free from the bank. Alexis was last seen on Sunday on a rescue and repair mission.

Saturday was too windy and cold for the RYA SE Zone Topper squad who had a day on shore, but come Sunday they were out on the water bright and early. Bright it certainly was, with Paul Playle's new Solo sail looking..well...shiny. 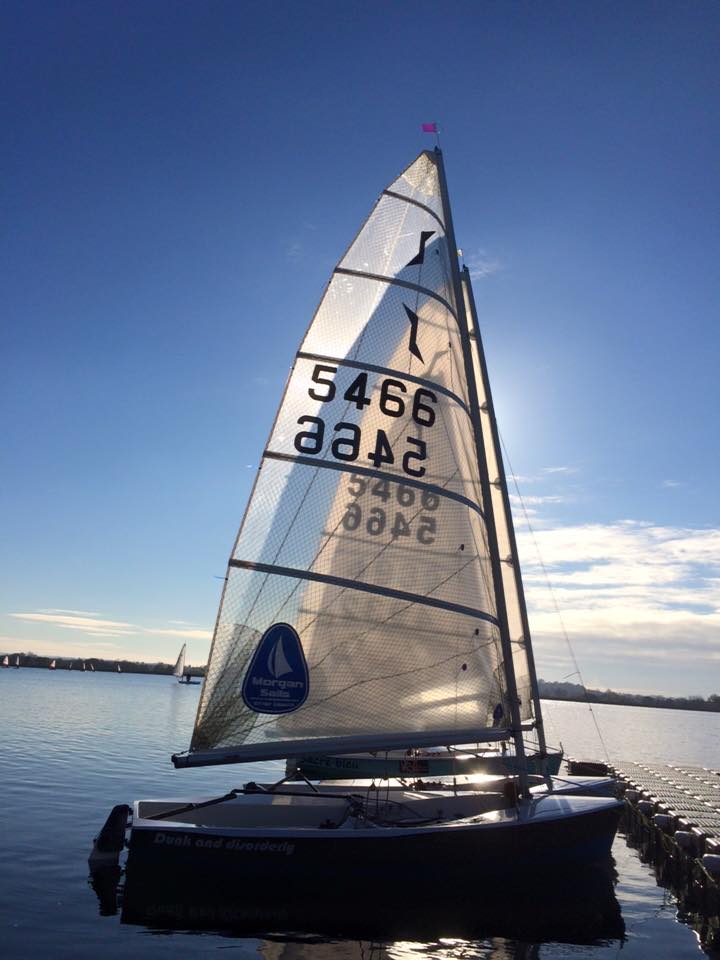 Another new thing (well, new to him anyway) was Paul Wright Anderson's ex charter RS Aero9. He also got a 7 rig. Will he match Gareth for pace? And is this the start of an Aero fleet (we now have 3)?

The wind situation can be ascertained from the above pic...there was not a lot, and what there was was backed about 120 degrees from the forecast NW direction. It was also bl***y freezing, with ice and solid sheets in the boats. At least the water has not yet cooled right down, but it had definitely turned noticeably nippy.

Race 1 was enlivened by the course taking us to a mark that was not there...mark 5 having shipped its mooring during the week for a cosy home on the eastern shore. Quick executive decisions on the water were made as the front of the handicap fleet rounded mark 6 to find their next destination missing in action. The race then turned into a procession of slow fetches as the wind veered and became very fickle and was mercifully shortened after 1 1/2 laps. The front of the handicap fleet finished pretty much overlapped, but of course not so on handicap, which Gareth won. Simon Bean took the Lasers and Mark Ampleforth led the Solos.

The back to back races were enlivened a touch more wind from the W that had a little bit more consistency, a heavily biased line, a very short beat that was very one legged and a series of reaches. Premium was very much on getting off the line in clear air as there were very few chances to overtake. Peter Curtis with Fiona Fardon in an RS500 got away to win the first, a great performance in less than ideal conditions for that boat. Paul W-A beat Gareth over the water in the second but not by enough to win on handicap in the bigger rig.

On the day Gareth was Boss of the Barn again, showing just as much speed in the light as it the winder stuff. Tim Lewis led home the very competitive Solo contingent, and Paul will be pleased with his consistency on his first day in the new boat.

By the time the Toppers came in off the water for the final time the wind was back up to a solid F4 and blowing cold from the N.

Next Saturday (28th) there is a First Aid course running at the Club with a couple of spots still available if you are quick. Sign up here.

Also details of our Xmas party events are now posted. In particular Mike Jones needs numbers for the children's party, the Sailing School bowling and the curry dinner.