Not the easiest of events to write a report for: truth is it would be better coming from a competitor rather than an old graybeard sitting on the beach swearing at computers.* If you were a competitor and would like to help me out by sending some impressions or incidents then you can email me here, and I'll be glad to hear from you. I've got to write a Yachts and Yachting report yet. Why me?

So, yes, we got to the reservoir and it had a pretty mirror finish. The reservoir that is. The clubhouse mostly had a finish in undercoat at best, with an added layer of dust. Sorry it was all so disorganised, but believe me it was an awful lot worse the night before. We had a nice project plan for the refurb that carefully missed all the major events. Hollow laugh offstage. What with one thing and another the work has hit most of the major events. Messily. Literally.

Goodness knows how the folks doing the catering were managing to produce bacon sandwiches out of the improvised kitchen facilities, but that was about the best thing visible before 10am. Well, what do you do? At a Topper event you can hardly hoist the AP and open the bar and there looked to be a tendency for air molecules to start at one side of the reservoir and wander in the vague direction of another side, so, when it became apparent little more was going to happen out we sent you.

Race 1 was a distinctly slow motion affair, I think there was only one lap, which in turn means the lap chart isn't much help to the scribe here. Annabel Sumaray from Papercourt won the race from Fin Swanton at Felpham, with Coco Barret third, and your reporter, still using unreportable language, jumped in his van and went home for more IT.

When I got back race two was in "full" swing. Actually I think there may have been some more wind for this one at times, because in front of me is a lap chart that shows two whole laps. Gosh. The drama. Daniel Thompson from QM had been leading at the end of lap one from Morgan Archer, but they swapped places on lap two. Fin  took 3rd and Coco 4th.

Lunch. Good lunch it was too, hot food and all. Talk about something from nothing. Good work team.

We were running pretty late by this stage, and it was obvious we weren't going to get 5 races in, but never mind. Race 4 was a strange one. Two laps again, and the first lap was an odd affair in which the first 5 or so got strung out over an enormous (well two legs or so) distance, and the rest of the fleet was compressed into a horrendously tight pack with any number of boats overlapped at every mark rounding. Morgan Archer won this one as well. I half overheard a story yesterday about a race winner drifting into the finish mark after the wind did something very peculiar, circling round, taking the penalty turn, recrossing, and still having ample time to win the race. Would that have been this race? Seems feasible. Most of the photos will be from this race. Ishbel Zuumad took 2nd, Coco 3rd, Daniel Thompson 4th.

Last race. Well, the beat was vaguely square for at least the first half, which was about as good as could be managed. The fleet tended to go well to the left. I thought there was going to be considerable rules action if everyone was going to come into the mark on port... As they drifted on I thought Leila Moore, who had taken a more central course, was looking very good, but Morgan had bailed out from the left earlier than most and was coming across on port. Now, was Leila on the lay line? Morgan obviously thought so, and put in an exquisitely timed slow motion lee bow tack which gave him the lead, the race and the event. And yes, they made it round the mark. Action amongst the next group was dramatic in a kind of choreographed slow motion type of manner, and whilst some of the starboard tackers were perhaps kinder to the port folk than I might have been, no-one hit the mark, and I didn't see any great rules breaches.  Ishbel came through for 2nd, with Leila 3rd and Fin 4th.

The results are here. Morgan won from Fin, Ishbel, Daniel, Coco (first U13) and Leila. Maxi Tustain, Maisie Bristow and Cormac (morning off) O'Brian were the top three from a depleted local turnout.

Apologies for the weather, and the state of the clubhouse, the sub standard results service*, no lunchtime photos and so on. What with the lack of wind and the shifts you would have thought it was pretty much a lottery, but the same folks managed to be at the front of the fleet most of the time, so talent will out I guess, and the prize winners deserve congratulations for mastering conditions which would have sent this sailor heading grumpily for the beach... 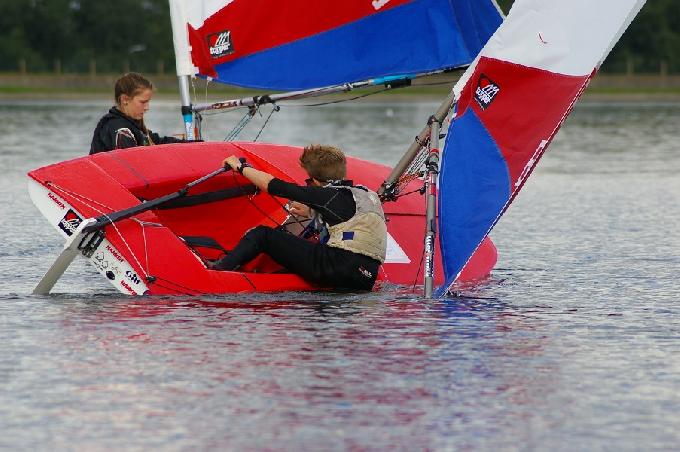 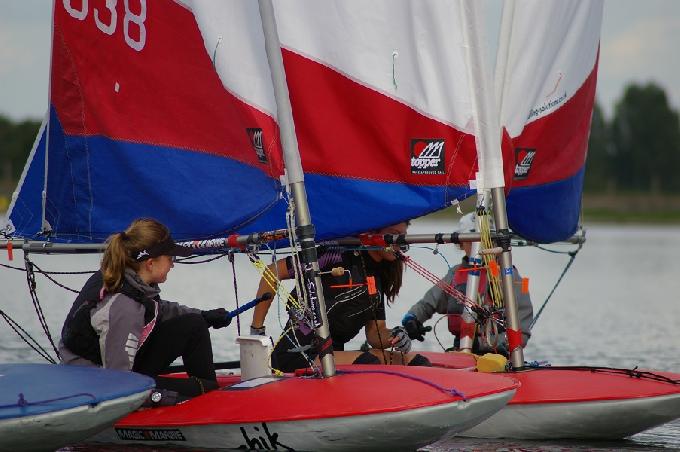 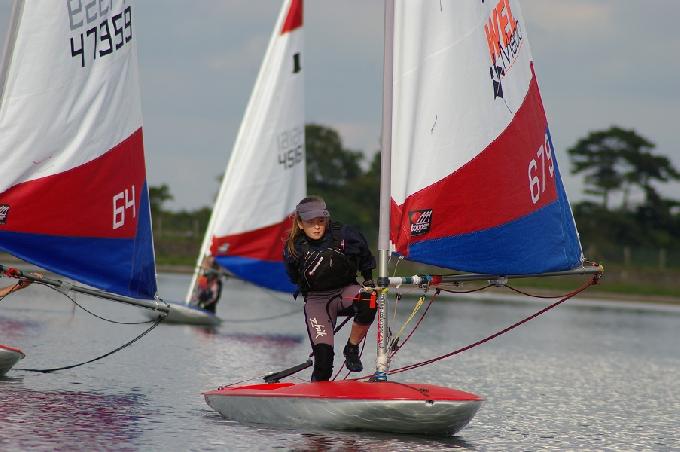 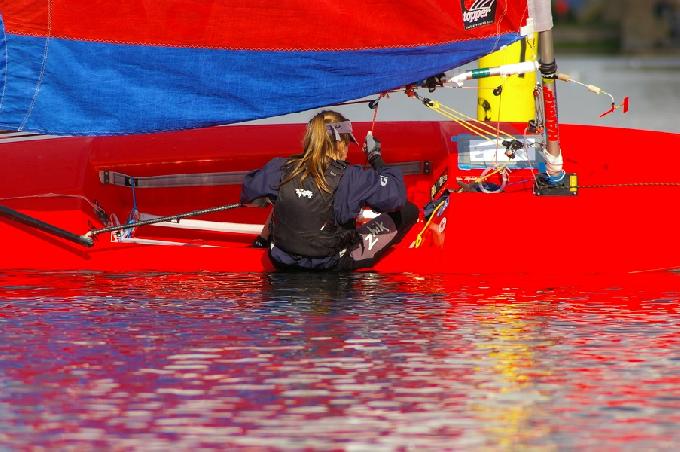 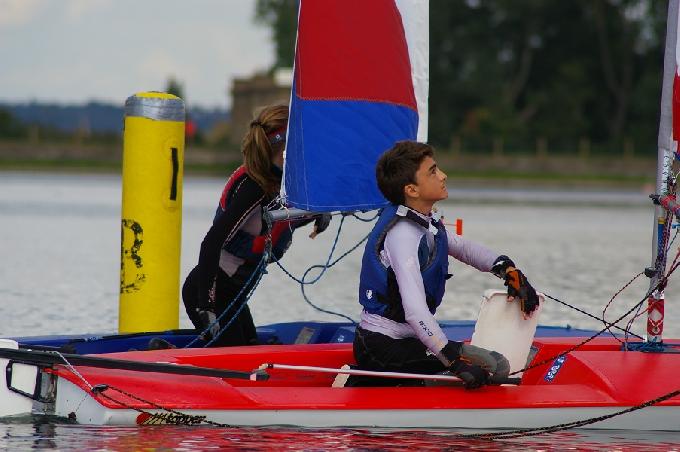 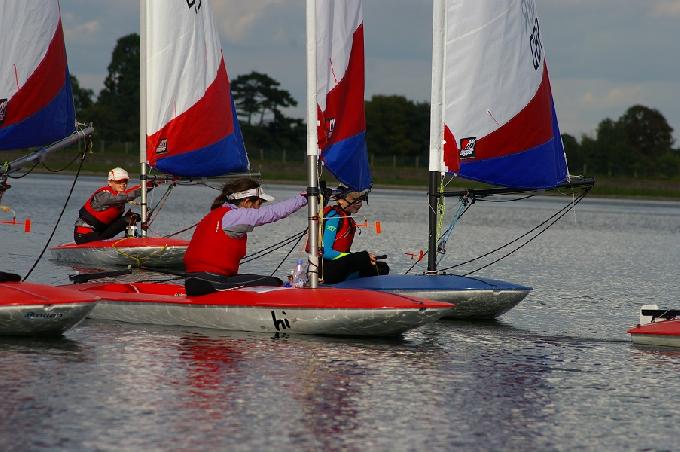 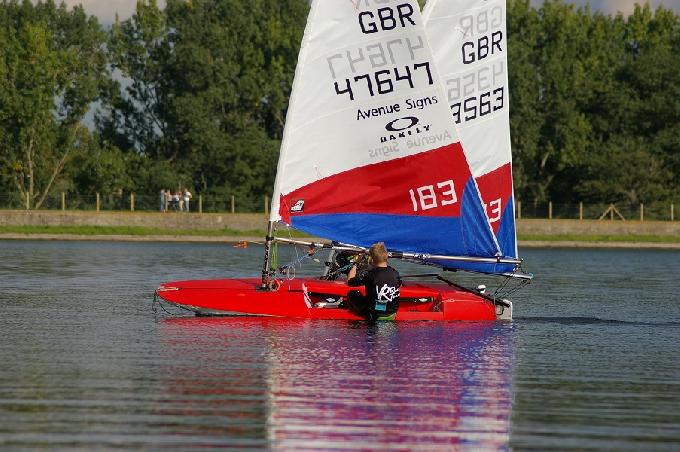 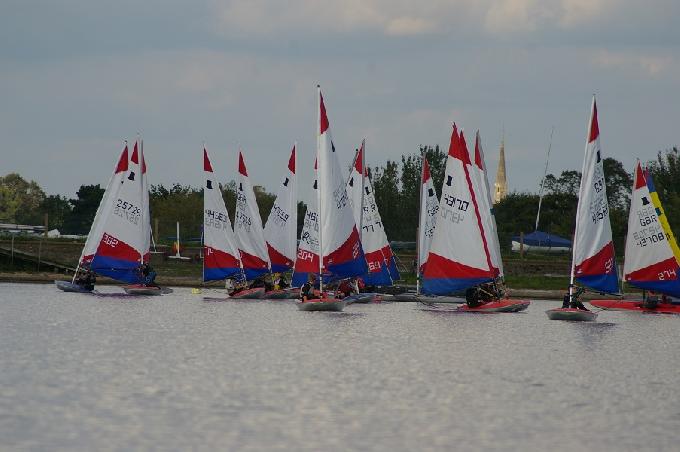 
Here's a few snaps, I haven't sorted, rotated or done anything else yet, just picked a few at random, although one is of that event winning slow motion lee bow tack by Morgan Archer.

You can see there was plenty of (ultra slow motion) boat to boat racing, you can't hear that there was a reasonable amount of comment if one or two looked like stretching the propulsion rules a bit, but the fleet discipline was such that the competitors sailed a damn sight more fairly and could have provided a lesson to certain adult fleets. No names, no hyphens...

A wider selection of photographs fron the SE Traveller Topper Open can be found here.  There sure won't be any of the spray flying action shots you might hang up on the college/bedroom wall, but there might be a few semi portrait type shots that grandmother would appreciate... Oh and a plea: please ensure you fill in the Championship numbers on the entry form: it makes it so much easier when I'm trying to caption photos for Yachts and Yachting!

*bloody IT. One laptop for entering the results, another for displaying them, no photo slideshow capability, (would you believe I had Windows 98 on one box: I think both PC and software was older than all you competitors), no internet connection other than a phone on a cheapo plan I daren't use as a wireless point. I'll try and sort out some more photos later.