The fourth running of this popular annual event saw 17 starters, 8 of whom, realistically, could have won.

Nancy Scott, last year’s winner, from Island Barn, now sailing a 29er regularly, showed signs of rust in Race 1. After an indifferent start, she was 12th at the windward mark. A new star, Morgan Archer from Blue Circle Sailing Club in Kent, led here, rounding just ahead of Magnus Handley from Queen Mary S.C. At the end of Lap 1, these two were in the same order, with Scott back in 9th. The two leaders match raced each other round Lap 2. As so often happens this leaves the others to play the shifts more correctly and catch up. Scott did just this and gained 6 places to round in 3rd at the end of Lap 2. From here the first three held position ‘til the race end, finishing Archer, Handley, Scott.

At lunch Archer, on a perfect score of 2 points, led from Scott on 5 points and Cook, Thompson and Handley all on 8.

Could Archer keep this up after lunch?

Race 3 was remarkable for two reasons. Firstly, at the start Scott was over and returned. With the leaders going left, she remembered the wind was forecast to veer and went right. This paid handsomely and she rounded the windward mark first by a handsome margin. Secondly, where was Archer? Answer: back in fourth, where he remained ‘til the finish. Finishing order for race 3: Scott, Cook, Thompson, Archer.

For the final race the points standing was Archer and Scott on 6, Cook on 10, Thomson  on 11, Handley on 12. For Archer and Scott there was all to play for, with Cook a possible winner should theses two both slip up.

Cook rose to the challenge and led throughout Laps 1 and 2, followed closely by Archer and Scott. Archer had a perfect, regatta-winning beat in Lap 3, and rounded the windward mark first. Scott also had a good beat and moved up to second. Archer now covered Scott to the finish, extending to win by 30 metres. Race 4 finishing order was Archer, Scott, Cook, with Harken Digby (Queen Mary) getting his best result of the day in fourth.

A good champion comes back well after a setback. Morgan Archer did this in Race 4 and was a deserved winner.

Ten year old Tom Williamson from Crawley Mariners, in a Topper 4.2, did well to finish 12th out of 17. 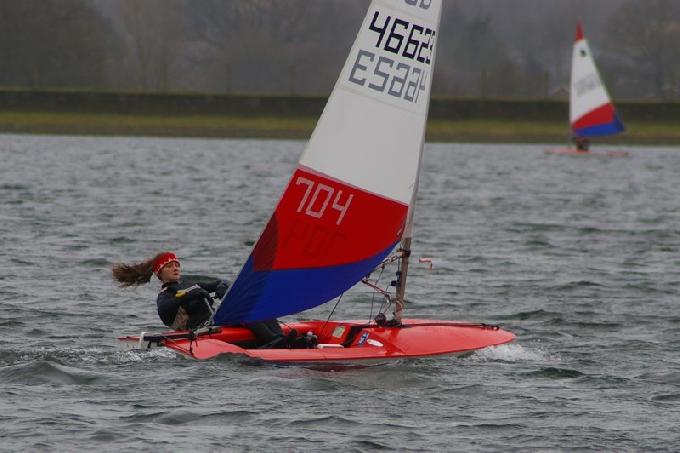 I'd like to apologise for the lack of photographs. The weather wasn't suitable for taking unwaterproofed cameras onto a boat - well at least not if its your own camera and replacements aren't allowable against tax, and at the best of times taking photographs from the down sun bank is going to be unsatisfactory. These are the only two that get past any kind of quality control. 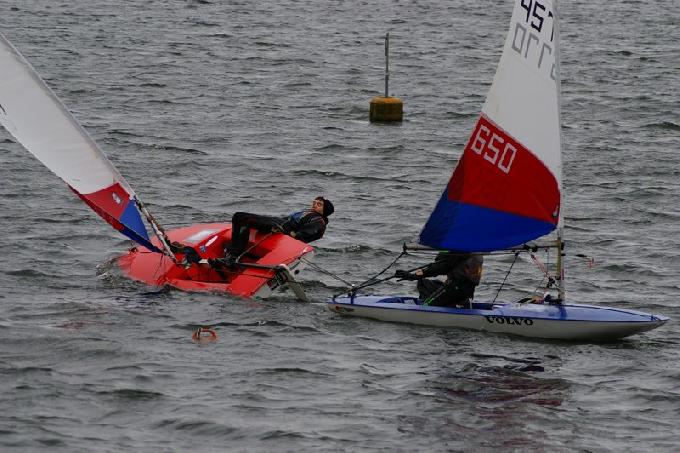