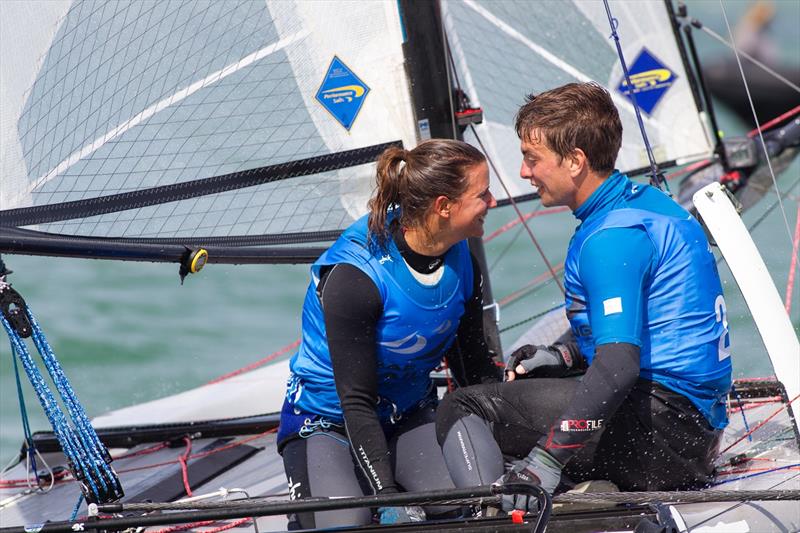 Nicola Groves, sailing with Ben Saxton, has just won a Silver medal in the Nacra Class at the Miami Sailing World Cup event. In case you don't know Nic switched to the Catamaran over the winter as the 49erFX was demanding too much lard. Well done Nic and Ben. The results are here.

Ben Saxton and Nicola Groves, competing in their second event since teaming up last October, consolidated their silver medal position in the Nacra 17 final race.

Gold had already been assured to the Italians Bissaro-Sicouri a day earlier, but Saxton and Groves protected their silver with a fifth in the medal race.

"We're taking this as our first proper event," Saxton explained. "Abu Dhabi was really a warm up for here, so this is the first event we wanted to identify and do well in and learn about our team. Not many people beat us so we're happy – we need to get the Italians next time!

"We were 17 points ahead going into the medal race so all we had to do was not come last. But we didn't think of it that way – we wanted to try and put a good result in, which is why we were happy wtth our second lap when we came back to fifth.

"You have to get practiced at doing well in medal races – there's no point just trying to come ninth!"

Groves was happy with how the new team is developing and her transition from the 49erFX to the mixed multihull class.

"I'm tired but I'm still feeling good. I'm looking forward to getting back to training and then into Palma and Hyeres. So a good future coming up! "New challenges, new team, new year... it's going to be a really good year I think. I've got a good feeling!"