Well, the Coot has hatched her eggs, and abandoned the nest on the edge of the main jetty. They appear to have found both a conventional burgee and a Hawk windex to add to the nest. Sadly only one cootling (is that right) seems to have survived to Wednesday, and the little family seems to have settled down on the floating ramp. I was wondering how on earth the young Coot would make it back up on the jetty... So the jetty is back in full use, but don't use the floating ramp. So here's our Coot family... 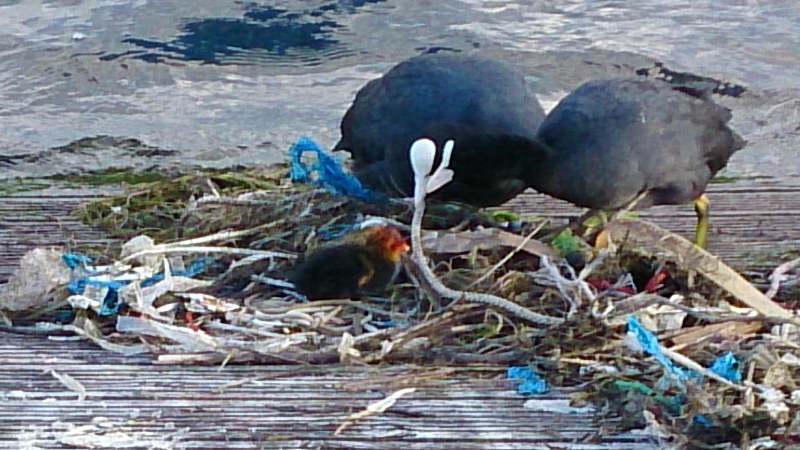 Anyway, it was blowing in the F4, maybe pushing F5 region come rigging time, and I decided I didn't feel up to racing the Canoe and gave the duty team a hand, without, perhaps, thinking sufficiently about clothing. Anyway, we set a lower case d course - long beat, short run about half way back down then a couple of reaches for a sort of triangle. As we set out to start the sequence the sky was looking more than a little ominous up to windward... 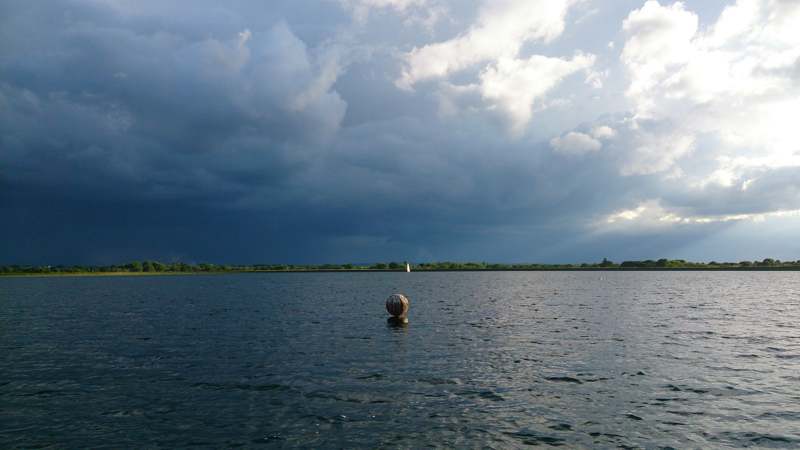 The wind was swinging a bit, so we set a line that was, we hoped, varying from square to port biased. Come the Slow fleet start it had gone to one extreme of course, and probably had a tad of committee boat bias if anything, and they all piled in from starboard side, but no-one was over fortunately. The sky was getting rather more ominous by now, but the great mass of rain did seem to be passing us to the south.  There was also a substantial bolt of lightning, but it was way over Hersham/Esher way and again seemed to be bypassing us. For the Laser start there were fewer boats, and Kevin Pearson generously elected not to push Paul W-A over the line, settling for discombobulating him somewhat and crossing with speed in clear air.

Just before the Fast fleet start we were sighting along the line when there was an enormous and seemingly close clap of thunder behind us - to the North of the reservoir - where there didn't even seem to be a lot of cloud. At this point we were getting pretty nervous about safety, and were saying something like "any more like that and we abandon". However as I recall that was the last of the lightning, and the fast fleet crossed the line, which was I think reasonably even at that point in time.

So now the first starters were approaching the windward mark, and the fast fleet making good progress up the beat and we started tidying flags and thinking about where to locate a finish line. Evan, looking upwind, noticed a boat over, and we dispatched the safety boat to check them out. At this point the sky turned a leaden colour and a huge squall and heavy rain and hail descended... Within what seemed like seconds the visibility was down to about half the width of the reservoir and we could see upturned boats in the haze. Straight up with the blue chequered flag and race abandoned: no choice - we don't have enough safety cover on a Wednesday if the visibility goes like that, never mind the wind.

Well, that was it really. People standing on inverted boats (not necessarilly the boats they'd started the race in!)  hoping for the wind to moderate, people swimming after upturned boats, Gareth, Paul and Mike Storey apparently revelling in it, but just about everyone (except Kirsty I think) falling over one time or another. According to Stuart he saw 49mph on the clubhouse anenometer in one gust, which would be Force 9... Certainly it was physically painful just driving the committee boat upwind into the weather to an extent I cannot recall experiencing before.

So the safety boat fetched and carried people between boats, good work by Ian and Clare, the committee boat proved too difficult to handle in the wind to achieve any more than count heads, and most folk headed for the shore. I reckon it was a good half hour before we got everyone (except Gareth, Paul and Mike) in. Half an hour after that only Paul was left out there, the storm past, and he was left in F2 and sunshine again. But by that time the rest of us, cold and wet, had retreated to the clubhouse and Stuart's Pasta, not to mention hot drinks...

Gareth comments "… and Paul did go over – he decided to wear round at 4 (I gybed) but then nose dived as when he bore away.
"There was more lightning – I nearly came in on my third lap – actually turned towards the jetty before I decided the sky was getting lighter.
"The hardest part for me was finding the marks – there was so much blowing spray/foam that the marks were invisible until you got close. From 4 to 2 there was no way to see 2, I could find 3 and so reckoned to pass that a bit to windward and aim for west of the tower until I finally could see 2.
"As I said ‘The commodore totally agrees with abandoning on safety grounds – the racer says shame."

Mike S adds "I would have liked a gps on board last night. I can honestly say I have never gone as fast. It was wild!"

So no race, and no results, but I reckon there'll be some memorable stories, not least amongst the teens in Toppers, a Feva and an RS200 who managed the appalling conditions creditably and I believe all got back to the beach unaided... And am I glad I wasn't out there in the Canoe?