Sunny, warm, some breeze, what more could you want? Well, speaking personally a bit more breeze would have been nice, but never mind. To give you an idea of the weather here's a photo featuring the famous Coot. Sorry about the composition, but the mobile phone was tied to the boat at the time (as you can maybe surmise) so not good for subtle composition! A special prize should go to the person who managed to help rig her boat and set off from the pontoon without actually noticing the bird on the end... Currently there's a very substantial pile of eggs under the Coot, who's beginning to get quite blasé about passing sailors... 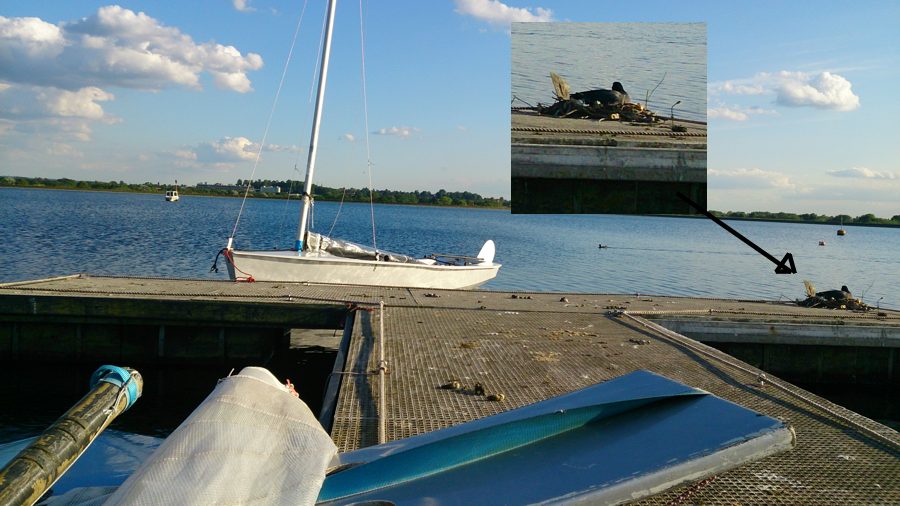 I felt brave enough to venture out in the Canoe without a wetsuit, hoping that hubris would result in that raidly dying wind rejuvenating enough to punish me... Well, it did perk up for the first lap or so, but basically a dropping breeze was the order of the day. Another longish course, with beat, shortish very broad reach to the middle of the lake (most asymettric had to gybe most times), shortish beat come fetch (depending on current wind state) back upwind, then a long run and finally a good kite reach back to the start. Most, including windward, marks to starboard for a change and some complication at the first windward mark...

One of those days when I didn't have my eyes open for the rest of the race too much I fear, but I'll do what I can. The start line looked pretty true when I checked it as the first gun went, but it sure wasn't by at least the Laser start, when they all started and immediately flopped onto port tack... With a shortish line and folk obviously going for the sail along the line and tack on the gun option it didn't feel like a night to try a port end start, but tacking on the gun in light air is not a recipe for a clean start in the Canoe. However neither was what I tried! The theory was to come in on port with speed and find a gap in the mid line. This was derailed by an RS[never mind who] who thought they'd get onto port early, then discovered they had to miss starboard boats and tacked back, but got semi stuck with two seconds to go... All of which left a knot in the bit of line I had in mind... detouring round this I found myself right in the backwind of Mike Curtis' RS400, which was about the worst possible place to be with the Canoe...

So, having got some clear, if diminishing, air, it was time to negotiate a very crowded windward mark. Although the leading Solos seemed to be long gone, it felt as if all the rest of the fleet, trailing slow class boats, Lasers, other fast boats were all arriving at the mark at much the same time. Remember its a starboard hand mark, I was a bit upset to have to duck an RS200, which is not on the game plan, even if it is Mark and Kate (need your surnames please folks), but worse was to come...

Coming up on what was, on that lap, mostly a not quite fetch to the third mark, there was a Solo, somewhat stalled, in front of me, close to the zone. It needs to be stressed that this Solo was doing absolutely nothing wrong, had a perfect right to be exactly where he was and was altogether sailing in a perfectly sporting manner: it was just my bad luck and bad judgement that stuffed me up... I probably should have gone well to windward further down the leg, but didn't, and as I approached the Solo I got hit by a big header... Well what to do. Go to leeward and most likely I can't get to the mark even if I do manage to establish an overlap in time, and I'll find myself needing to tack in the zone, in front of or even alongside a boat that can probably fetch the mark. Well clearly that one needs discounting swiftly. Go to windward? It feels like a big header: not going to make it. Well, going to have to tack: but am coming up on the Solo fast, need to crash tack to miss him, and crash tacking in light airs is a good way to stop the Canoe. No choice. Argghh! Reckon that's a good 30 seconds lost on Curtis... Grrrr. And after that the race got worse on team Canoe...

By the time my part of the fleet was on lap two. with the wind diminishing all the time, and also backing some, the leading Solos looked to have a very healthy lead. Most especially Rob Pettit, who I think was a substantial chunk of a short leag clear of Messrs Griffiths and Playle, who seemed to be having a good old fight.

There was also a considerable battle with much place changing going on between two of the RS200s, lets call them I and C, and this culminated in an incident which, if I interpreted it correctly, the wrong boat did turns... Let me talk through this one, because its a reasonably common incident which is easy to get wrong. You can cross check the rules here.

They are on the beam reach approaching as starboard hand rounding where they will go onto the beat. At this stage I is ahead, and C gains an overlap to windward from behind. Rule 11, part A, windward keeps clear, and C did, with I luffing. All legitimate. I is right of way boat, and in fact stays right of way boat right through the incident. But, as the preamble to section A states, "some rules in Sections B, C and D limit the actions of a right-of-way boat".

So the leading boat reaches the 3 length zone, and rule 18 switches on.

"(a) When boats are overlapped the outside boat shall give the inside boat mark-room,[snip]

(b) If boats are overlapped when the first of them reaches the zone, the outside boat at that moment shall thereafter give the inside boat mark-room[snip]"

and lets also read the definition of mark room, because the definitions are vital and every bit as important as the rules themselves.
"Room for a boat to leave a mark on the required side. Also,
(a) room to sail to the mark when her proper course is to sail close to it, and
(b) room to round the mark as necessary to sail the course.
However, mark-room for a boat does not include room to tack unless she is overlapped inside and to windward of the boat required to give mark-room and she would be fetching the mark after her tack. "
A key phrase here is "at that moment". There's no need for a hail or anything else. And although a ROW boat, which 'I' was, is generally not expected to react until the other boat does something, in this case they must act as soon as they hit the zone.

C, the inside boat, had lost sight of the mark, and had to gybe down to round it. They were under the impression that by gybing on to port they had lost right of way and were thus in the wrong. However they never had any right of way to lose: 'I' was already right of way boat by having been leeward. It is possible to lose the entitlement to mark room, but only  "if the boat entitled to mark-room passes head to wind or leaves the zone, rule 18.2(b) ceases to apply." (18.2c). C then touched the mark, having insufficient room to miss both I and the mark, and gybed back onto starboard and then took a 720 penalty.

For the mark touch rule 21 applies:

"When a boat is sailing within the room or mark-room to which she is entitled under a rule of Section C, she shall be exonerated if, in an incident with a boat required to give her that room or mark-room [snip]
(b) she is compelled to break rule 31. (31 being touching a mark)"
So I reckon that C had mark room, was entitled to sail to the mark, gybing if necessary, and had no need to take a penalty either for touching the mark or impeding the ROW boat 'I', which could be considered not to have given sufficient mark room.
The subtlety in the rules is that if a boat has both Right of Way *and* Mark Room then they can more or less sail where they like and do as tailored a mark rounding as they like, but a boat that has Mark Room but NOT Right of Way can only sail straight to the mark, and not take a wide turn or whatever even if they would like to.
Anyway, back to the race. The team chose to finish the race at the end of the first beat on the third lap. You need to be very careful doing this, because it precludes average lapping. According to our Sailing Instructions any lapped boats *must* be finished when they go through the line after the S flag is up, so you must finish a handicap race at the same mark that you started at if any boats have been lapped. If not then its impossible to work out the results unless you timed the fleet at the mark you finish at on every lap, so the race could end up being scrapped. On the other hand it meant only a short sail from the finish, instead of having to beat up from the far side, so it was a good call in the circumstances.
Oh yes, the results. Has anyone got this far? A Solo 1,2,3 (Rob Pettit, Paul Playle, Gareth Griffiths) was something of a Catholic Pope situation. Mark and Kate got 4th in their 200, Chris Smith a respectable 5th in his Streaker, and Kevin Pearson 6th in a full rig Laser. In the Personal handicap results look similar, but Dave Baldwin's 3rd in his Vareo was a very respectable performance in what were not remotely Vareo conditions.
Series? Anyone's game yet of course, but it looks as if Rob Pettit is going to be chasing Gareth hard with a view to getting his name on that board again. Be foolish to disregard the Phantoms or Paul Playle, and Mark and Kate in the 200 will be there too I reckon, especially if we get some less Solo friendly conditions. Read places with care though, because I am yet to amalgamate results for people sailing more than one class.