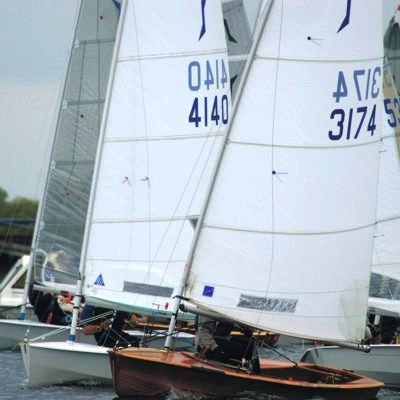 This year our open provided the finale to the Thames Valley Solo circuit with great racing conditions - never too much wind and never too light, but with plenty of small variations to exercise the tacticians.
With a SSW wind and a triangle sausage course the open water was used to good effect providing good beats and true runs. Messrs Pettit and Smith's briefing (in between bickering about who was race officer and who assistant) contained dire warnings of black flags but they also set a generous line length without excessive bias and all the races went off with no recalls. Also very welcome to see was a generous turnout from the Solo fleet's newer members. The local turnout isn't always that numerous for the Solo Open, but they did us proud this time.
In the past this event has coincided with Hampton Court flower show just down the road, and resultant traffic problems for visitors. I recall one year getting a competitor on the water withing ten minutes of his late arrival: while he was asking for the start to be put back several people descended on his boat and before he knew it he was on the water and and on time for the sequence. I digress. Anyway by moving to October we couldn't possibly clash with the blooming flower show, so thought we were safe. So the roads authority closed the A308...
Before the start of race 1 several competitors went for an extended trial first beat, nearly to the windward mark - something they perhaps regretted when the AP went down and they discovered they were several minutes from the line. Race 1 started in a pleasant force 2-3 with Simon Lomas-Clark from Frensham leading round the first mark from local sailor Gareth Griffiths. These two duelled through most of the race with Gareth showing better upwind speed only to be pegged back on the runs. By the end it was Gareth from Simon from Tim Lewis (Littleton).
Worst affected by the traffic was Godfrey Clark, who missed race one completely. Out and ready for race 2 he found himself duelling for the lead with Gareth. There was no clear route up the beats so playing the shifts was the best option but no place was ever safe with gusts downwind bring the fleet back together. Gareth took the race to lead at lunchtime.
Lunchtime... and the rain came down. Well timed rain in the event, as after the Stuart's excellent Shepherds pie the rain had stopped and the wind returned, and in much the same direction too.
Race three and Godfrey got a flyer -  going left up the first beat he was able to make the first mark on port clear of the fleet while behind him Gareth rounded fourth.  As the race unfolded Gareth pulled through to second but Godfrey consolidated a substantial lead with Tim Lewis again a consistent third place.
So... all to play for in the last race - if Godfrey won he would take the honours by the smallest possible margin. The wind was coming up a touch and even the sunshine put in an appearance or two... Off the start the two leaders were side by side with Gareth just able to lee bow Godfrey. A few covering tacks later Godfrey fouled another boat while attempting to clear his wind and the ensuing 720 put him down to mid fleet while Gareth powered ahead to lead round the first mark. Godfrey doesn't give up lightly and each lap saw him climbing up the leader board but Gareth kept a loose cover on, allowing CJ Cavallari (Island Barn) to briefly take the lead on a favourable shift, but downwind Gareth gained an overlap on the gybe to regain the lead. Biased spectators on safety boats were heard cheering on CJ, still in second with a queue behind, including  who was up to fourth. On the final triangle Gareth pulled away with the every consistent Tim Lewis coming through to second, Godfrey third and CJ fourth. Further down the fleet we had a certain amount of attrition: the first was Simon Lomas Clarke, who was called off the course with an urgent message to ring his family: it turned out that the message was actually for a club member with a very similar name! Wish we could get BT to replace that phone line! Anyway he got redress after a thoroughly conventional redress hearing. Any rumours you might hear about our bar manager being unwillingly co-opted into a "protest committee" of two taking about two minutes to make the decision are of course completely exaggerated. Be quiet Eddie. Then Mike Wilkie had to retire on the last lap with a very painful blow to his knee, converting a top 5 placing to 7th, and at least one other had to leave the course early too.
So overall the top three were Gareth, from Godfrey and Lewis third. I can't remember the last time we had an in house winner for a Solo (or Laser) open: well done Mr Griffiths.
Alan Bird just took the Grand Master's prize from Mike Wilkie on count back (Mike's top 5 would have won it) . The prize for the older boats (pre 4100, aimed at boats before the FRP generation) was won by our own Roy Poole.

Report mainly by Gareth, with some extra bits from JimC.

Here are the results...

If you'd like copies of photos I took from the event you can email me here, but my enthusiasm for trawling through 250 odd photos to email out a selection is not unlimited - a SAE and a USB stick/SD card with 600MB free coming to me in the post would be my preferred route, or for local sailors there are copies on the club laptop. I fear this collection wasn't among my best efforts, but I blame the light!