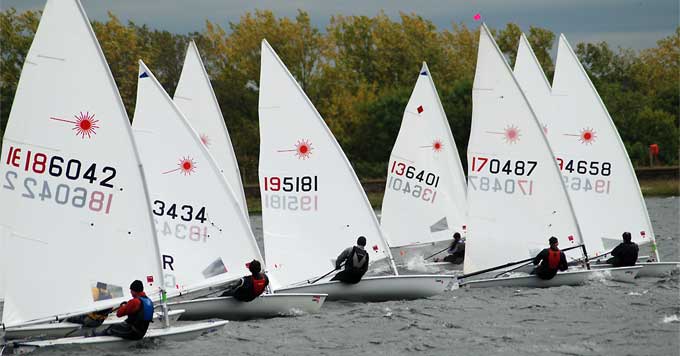 The glorious but largely windless Indian summer had come to an abrupt end during Friday night. Saturday dawned with gales forecast in sea areas Thames, Dover and Wight, a fast moving 7/8ths cloud cover and trees rapidly shedding their leaves. And it was cold.
The local inland forecast was for 18 to 24 knots from WSW and it was accurate. Either the forecast, or first hand early morning experience, had put off many visiting and home sailors and the Laser turn out was the smallest for many years. The fleet was evenly split between visiting and home boats and Standard rigs outnumbered Radial rigs by 12 to 4.
Last year's winner, Graham Lund from Aldenham, started as he finished in 2008, by winning Race 1 by 75 metres, from Daniel Francis from Papercourt. Lund continued this form in Race 2 by leading from start to finish, though this time Gary Bullock from WSC was overlapped at the end of Lap 1, but touched the mark in his eagerness to tack away for clear air. The resulting 360 gave Lund another clear victory. At lunch Lund led Bullock by 2 points to 5, with John Peck third on 9.
The wind rose during lunch and 5 Lasers thought better of it and stayed ashore. Racing became a battle of survival. In Race 3, Bullock started well at the pin end, held on to starboard to near the lay line and rounded the windward mark ahead of Lund. On the run Bullock sailed high, and gybed half way down the leg in a lull. Lund chose to sail deeper and gybe at the end of the run. On lap 2 both did the same, but this time Bullocks caution paid off, as he was the only one to gybe successfully, Lund and the rest capsizing at the end of the leg in a fierce gust. Bullock won easily. With a discard now in play, the score was now Lund 2, Bullock 3.
Lund paid more attention to Bullock in Race 4. They both started together at the pin end and drag raced out to the left hand lay line, tacking simultaneously. They rounded the windward mark overlapped. Bullocks reaching speed gave him a lead, which he extended on the run. He covered Lund in lap 2 to win by 20 metres. The score was now Lund 4, Bullock 4.
In the final race showdown it was match-racing time. Again, they both started pin end and sailed out to the left side. This time Lund tacked earlier. Surprisingly, Bullock carried on out to the lay line. This was his undoing. The wind went right, giving the centre-course sailors the advantage. Island Barn's Paul Wright Anderson rounded first, Lund second, Bullock third. These positions were maintained to the start of the all-important final beat. Lund and Wright Anderson now got locked in a tacking duel in the centre of the course. Bullock seized his chance and sailed off to the left. He was rewarded by a left hand shift, overtook the two leaders and rounded first. After completing a heart-stoppingly wobbly gybe on the run, the work was done. He finished first and Wright Anderson held off Lund for second.
So, in a day of two halves, Lund's two morning firsts and two afternoon seconds were gradually overhauled by Bullocks 3 afternoon firsts and one morning second. This really was a tough, brilliantly fought battle in very difficult conditions, decided in the last half of the last beat. While Gary Bullock should be congratulated for recovering from a difficult morning and taking the trophy, both sailors should be praised for putting on such a skilled show of competitive racing throughout the day.
Of the rest, Simon Bean had a good day which included 2 fourths, to take the Masters Prize. Paul Wright Anderson easily took the home-sailors trophy, and the first Radial was Peter Hamment of Papercourt. Charlotte McCarthy, the only lady, did well to finish 12th in a Radial, beating 3 standard rigs.
Visit the photogallery to see pictures of the racing and winners
Selected results