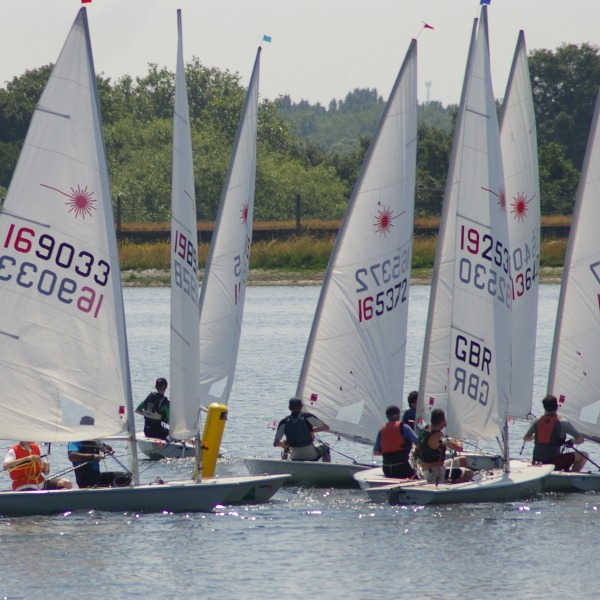 A very unpromising weather forecast - well unpromising for sailing anyway - was presumably the reason for a very low turnout at the Laser Open today, although maybe Wimbledon finals didn't help either. Something odd we noticed in the clubhouse: whilst the sky above Island Barn Reservoir was a pale summer blue as in the above photo, that visible on the BBC at Wimbledon, not 10 miles away, was a brilliant blue. The BBC couldn't possibly be using colour filters - could they?

Anyway, after an early lunch the wind did fill in enough to get some racing in, even if there was scarcely a leg of the course in three races that competitors didn't sail on radically different points of sailing at one time or another. However in spite - or maybe because - of this there was some extraordinarily close racing. In the above photo, for example, at least 80% of the fleet is visible round the "leeward" mark at the end of the first lap of a race.  Here are the race results, and following is a report from Paul Wright-Anderson.

"‘Lovely day, but probably not for sailing’ was the common view of the sailors who turned up for this event, and probably accounted for many of the usuals who stayed away this year.
"As it turned out though, after the early lunch we had a lot of fun, close quarters racing.  In the first race, I was pleased to get a good start at the favoured pin end of a biased line, and held on to my lead for the first lap. I was closely followed by Robert Blois (Maidenhead SC), Alex Storey in his first Laser open and Kevin Seebaluck.  Robert showed good boat speed, taking and extending his lead during the second and final lap.  Four of us were within a boat length on the finish line in the race for second place.
"A more contested start on a changed course for the second race meant that three of us were OCS and had to go back. I then went hard right in search of breeze, which worked a treat, and nearly enough to take the lead.  There followed much place changing until Robert Blois (choosing the right hand side on the second beat) and Ali Smith (on the left) broke clear of Chris Nash (Reading SC) and others taking the shifts up the middle. It looked for a while like Ali would take the win, but Robert passed him on the final reach to the finish.
"The third race was a little different with Robert OCS and in the middle of a packed fleet unable to return to the line immediately.  This time it was Simon Bean who edged in front before pulling away on the last reach for a substantial victory over me in second and Ali in third.
"Ten tired but happy sailors returned to the pontoons after the third race, dwelling on their triumphs and what might have been.  Big wind shifts, occasional gusts and a few lulls had made for some excellent sailing, and Robert Blois the deserved winner with me, Simon and Ali taking the other places. "
Paul Wright-Anderson

Here are some photos. I fear they are not great: I wasn't able to get out in a boat, but I do think some of them give an atmosphere of just how close the competition was. I also like the cardboard cutout effect of the Surrey hills behind Sandown in some of the pictures. I think you can actually see all 10 boats in quite a number of the photos: amazing really: I can't ever remember being able to do that more than a couple of minutes after a start gun.