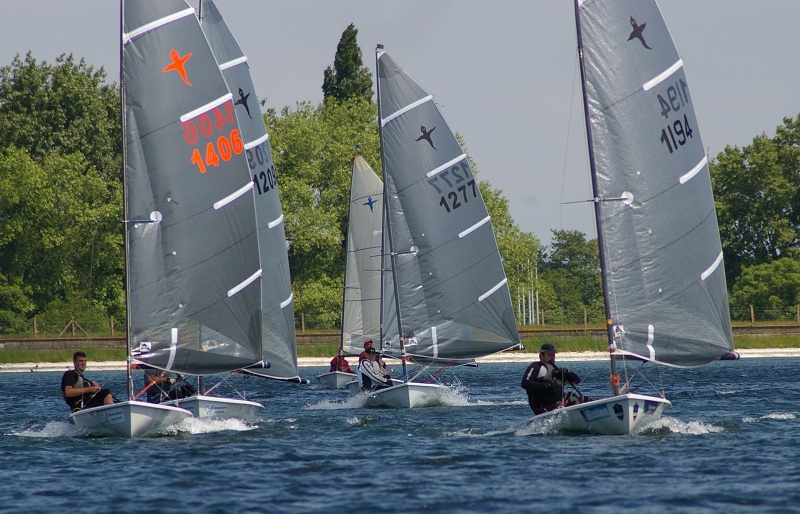 Saturday 8th June saw competitors arriving at Island Barn Reservoir Sailing Club near Hampton Court for the 5th "Tim Hemsley" Southern Phantom Open, sponsored by Monkey Marine and Exmoor Ales. The forecast was 15 knots gusting 28 with sunshine, and for once the weather arrived as predicted and the wind blew (and shifted) all day while the competitors basked in bright sunshine.
Race 1 - The Race Officer, Gareth Griffiths set an old style Olympic (triangle/sausage) course which led to some close racing with the wind gusting at around 20 knots and at times shifting 60 degrees causing a number of competitors to take the early bath to windward. Ian Jay who tried his luck with a 'port end flyer' on the start line - and he would have got away with it had he not been headed as he was about to cross the starboard boats, so Ian Sullivan led the fleet chased by Nick Mason, Mike Tustin and then the unlucky Jay. With the shifting wind and gusty conditions positions changed on a number of occasions ending with Ian Sullivan taking the honours followed by Tustin and Mason, who had recovered well from a capsize at the windward mark on the first beat.
Race 2 - started with the wind blowing a good twenty knots. Nick Mason fought his way up the first beat crossing Richard Barker, Tustin and Jay to lead round the windward mark. At this point the wind gods smiled favourably on Mason, and a private gust sent him out of sight of the other competitors. The battle for the other places continued in testing conditions ending with Jay second, Tustin third (following a swim) and Barker following up in 4th, and Sullivan not finishing.
Race 3 - Started, after lunch, in a strong breeze and with the event wide open. Sullivan, Barker, Mason, Jay and Tustin fought up the beat in the numerous shifts and gusts, exchanging places regularly. Mason was caught out at the windward mark when an 80 degree shift put him into windward. Sullivan and Barker took advantage and headed off downwind followed by the rest of the fleet. The racing was close with the first three boats finishing within 30 seconds of each other. Sullivan was first, Barker second and Mason, making his way back up, third.
Race 4 - It was more of the same, great wind, warm sunshine and close racing. Once again it was Ian Sullivan, 'The Beast from the East' who prevailed taking the win followed by Barker and Mason. Sullivan would also, had there been one, have taken the race team's 'concours' award for his boat with complex graphics on the topsides and immaculate varnished decks.
Full results

If you'd like copies of photos I took from the event you can email me here, but my enthusiasm for trawling through 240 odd photos to email out a selection is not unlimited - a SAE and a USB stick/SD card with 650MB free coming to me in the post would be my preferred route.