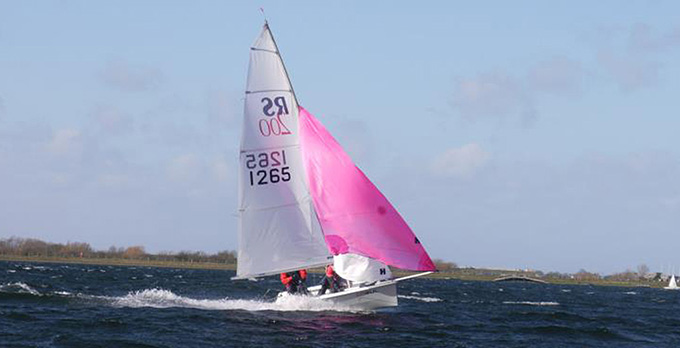 Can we have the winter for just a little longer? No, we’ve not gone mad, nor are we not looking forward to the summer season but we are celebrating the final race and the entire series of the RS200 Winter Freezer Races at Island Barn Reservoir Sailing Club.

So, we have battled through gales, snow, fog and even the occasional sunshine but the one thing to remember above all this has been the racing. Congratulations to Dan Goodman and Jo Lloyd from Littleton SC for the overall win of the series, not to mention the final day of the series. Second place went to Martin Vinson and Debbie Robertshaw also from Littleton SC. Julie Harrison and Liz Carrell topped the places from the home club followed by Clare James and Lucy Gibson with some consistent results.


The report for the final day:

The morning started with 18 helms/crews setting their boats for a good breeze and the race officer set a W shaped course: a long beat, close reach, long run, short beat and then a short run back to the finish line.

Race 1, 1030am:
The start of the first race didn’t fail to excite. With the wind coming over the bank of the reservoir from the south both Dan/Jo and Peter/Nick got off the line and kept on starboard towards the middle of the reservoir whilst the majority of the fleet tacked off on port. At the first mark Dan and Peter’s tactics paid off and they had managed to pull away from the fleet. By the time they had soaked down the run back towards the clubhouse the gap had opened up to make it into a two horse race. Despite Peter and Nick getting close on the final beat they couldn’t stop Dan and Jo from pulling away to take the first race comfortably. Third place was taken by Julie and Liz after they set a great course for the final run to beat Andy and Carl to the finish line.

Race 2: 12.15pm
For the afternoon races the race officer set a more traditional rectangular windward/leeward course with two short reaches at top and bottom marks. The wind still came over the reservoir from the south but it had droped quite significantly. The start of race 2 sore Peter/Nick and Dan/Jo following similar tactics to the first race and heading off towards the middle of the reservoir on a starboard tack. However, this time Peter/Nick found them being pushed much further into the middle of the reservoir resulting in their approach to the first mark on a port tack. Inevitably they had to gybe off to the back as the body of the fleet led by Julie/Liz held the layline to the top mark on a starboard tack. Dan/Jo pulled away from the fleet with Peter/Nick working their way through the fleet to get close to Andy/Carl but they weren’t able to get past them. The battle for 4th place sore Julie/Liz and Martin/Debbie pushing one another high towards the finish line allowing Clare/Lucy to catch a great gust and blast past the two boats to take forth.


Race 3: 1.15pm
After a long second race the course for race 3 was kept the same but shortened to 2 laps. This time the fleet kept together as they approach the first mark. Peter/Nick rounded first with Andrew/Mike taking advantage of a slight increase in the wind speed to follow close behind. The main fleet gybed around the top mark and soaked down the middle of the reservoir. Dan/Jo led followed by Andrew/Mike and Andy/Carl. Dan/Jo held the lead position from Andrew/Mike who found a patch of pressure allowing them to pull away from Andy/Carl. Peter/Nick passed Julie/Liz to take forth place. The final place and end of the series resulted in a little confusion as Clare/Lucy managed a hook finish that Xav/Felicia duly copied. Xav/Felcia spotted the error, re-rounded and finished ahead of Clare/Lucy.

Finally a huge thank you to duty teams that have managed the races and manned the rescue boats throughout the series in all of the weather conditions… perhaps they are looking forward to the summer! 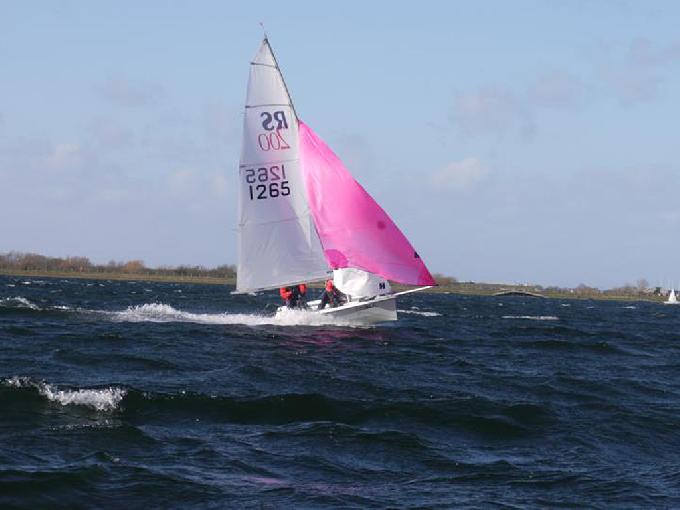 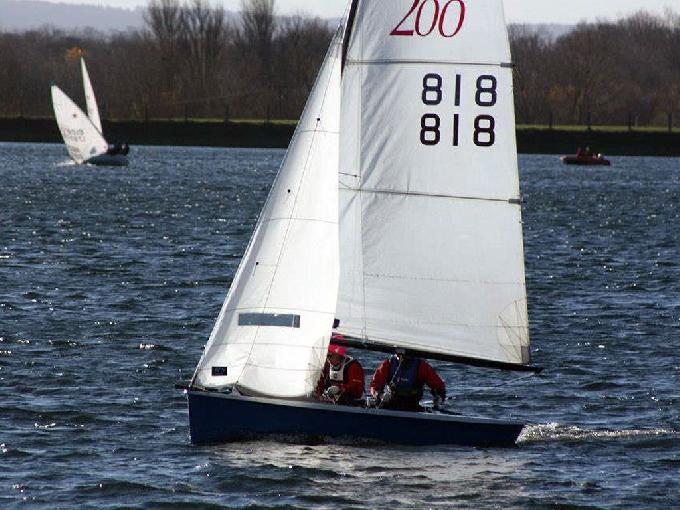 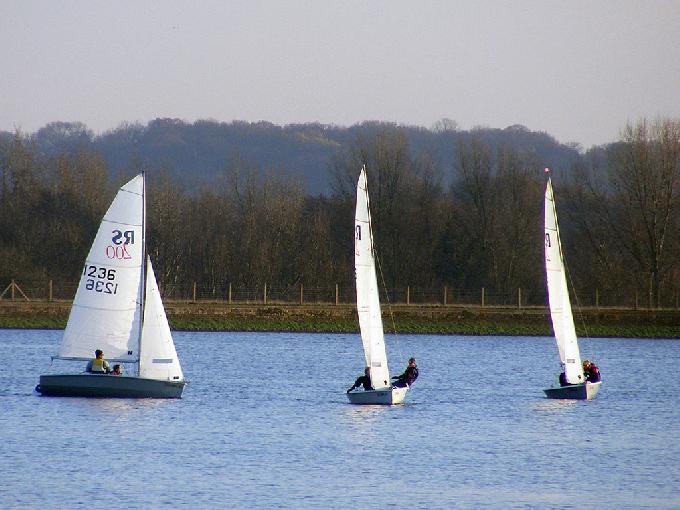 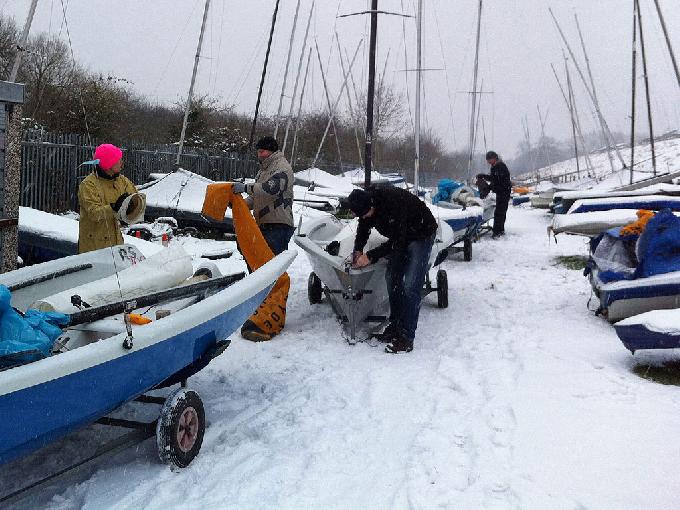 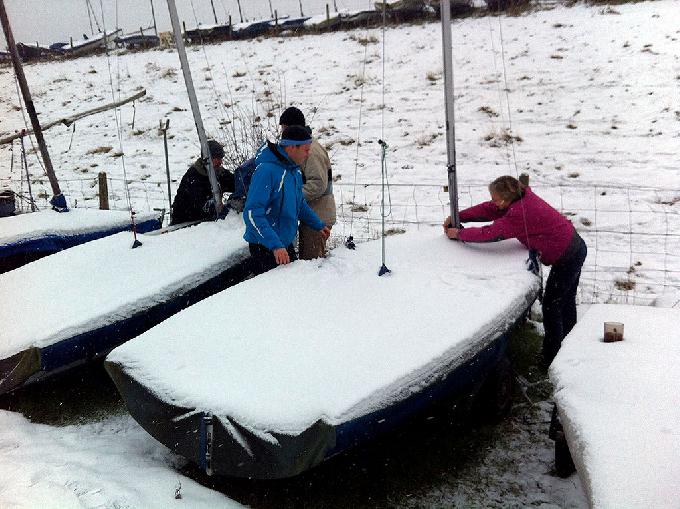 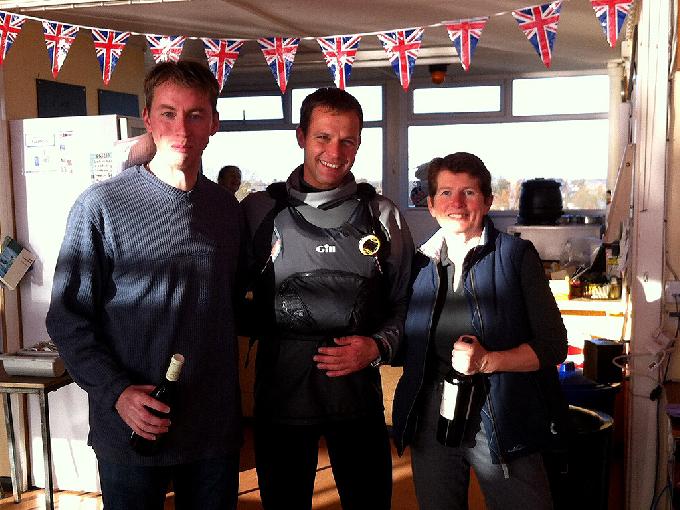