Well, we named it the RS200 Freezer Open Series for a reason and today, the weather lived up to the title!  Who would think that in minus temperatures, snow and ice that we would still attract sailors from not only the home club but also travellers from other local clubs? So, the weather facts... temperature -1c, visibility moderate, wind NNE 6-14mph and snow!

The day started with the Race Officer and his duty team braving the icy steps up the side of the reservoir to unfreeze the locks and set up the rescue and committee boats.  A simple rectangular course was set (1, 9, 7, 5). A beat across the reservoir towards the clubhouse, then a reach, a dead run and finally a close reach back to the committee boat.

Rigging the boats in the cold took somewhat longer than anticipated.  I'm not sure if the delay was due to frozen fingers trying tie knots and fasten shackles or the snow ball fights that inevitably broke out between the crews. So, the start was set for 10.45am although by the time we all took to the water and made for the start line on the far side of the reservoir 10.45 had passed.  Thankfully, the Race Officer took pity, raised the postponement flag and waited for all of us to make our way over.  Just before 11am we eventually got away with a clean start.

The first beat followed the pattern of the previous races in the series with Dan and Jo leading the charge to the top mark. However, on the run back to the committee boat, Carl and Julie over took Dan and Jo taking the lead. They held off Dan and Jo to finish the race in first place. The middle order saw Martin and Debbie coming in ahead of Andy and Paul. Nick and Clare made up for their poor start.  They had a disaster with the centerboard but eventually over took Richard and Roy with a lap to go.

After four laps the question wasn't can I feel my fingers and toes but crucially am I holding the tiller! Thankfully for all the sailors and the duty team the Race Officer decided to end the racing after the first race. Packing the boats away was followed by the prize giving accompanied by warm drinks in the club house.

A special mention must go to Paul, Roy and Richard who were persuaded to leave their Solo, Merlin and Phantom for a first sail in a RS200. Looking at the picture beneath Paul enjoyed it so much he needed to cool off after the race! 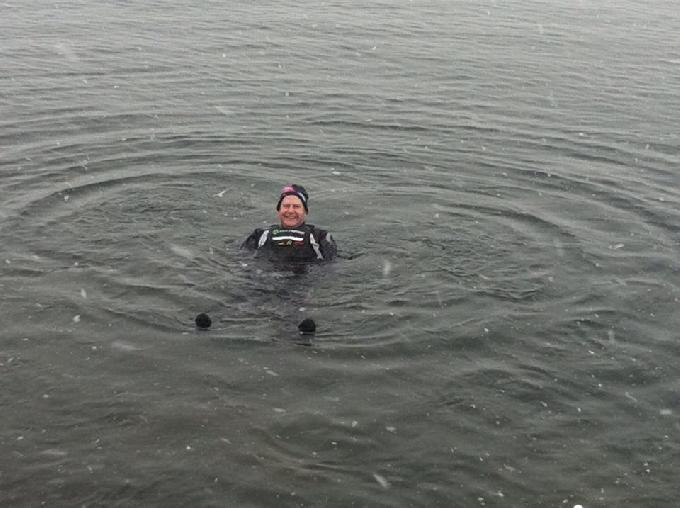 Finally a huge thanks to Race Officer and the duty team for braving the freezing weather so we could all enjoy sailing in the snow!