Dinghy racing gets us all a bit excited in the heat of the moment, but it should all be very good natured. IBRSC is a friendly club and we don't have any modern-day Captain Bligh types (if the yells and screams are coming from within your own boat, that is a different problem...). Light wind Saturdays, when Solos are as fast as Lasers, often produce friendly inter-boat chats as we drift round! 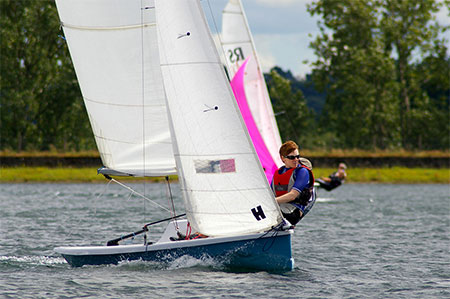 We do not insist that people race at IBRSC - but if you are just cruising, please keep well clear of racers. In particular, keep clear of the start line any mark that boats are racing round, and don't put someone racing in your wind shadow.

Give the living-on-the-edge asymmetric sailor a chance; they have a big blind spot behind their spinnaker and a lively boat to control. If you're in a single hander, use the same survival tactics that you would on a bicycle - make eye contact with one of the crew and don't hesitate to yell if you think they haven't seen you, even if you are not asking for priority. Bear in mind that once over-powered, their only options are to bear away or capsize, so think twice before luffing an RS400 or a 29er on a windy day as if they lose it they might fall on top of you!

If you foul someone (and you will, sooner or later) you can exonerate yourself by making a 720 degree turn. That's two complete turns with two tacks and two gybes. Sail racing is largely self policing so if you think you were wrong take the penalty. If there was an actual collision go and see them afterwards to apologise and check for damage. That is why we have insurance; close-quarters dinghy racing is bound to produce a collision or two. Laser sailors have the luxury of tough low-level gunwales which can put nice dents in wooden boats. A swift apology and a pint will usually make amends in the unlikely event of offense being taken. 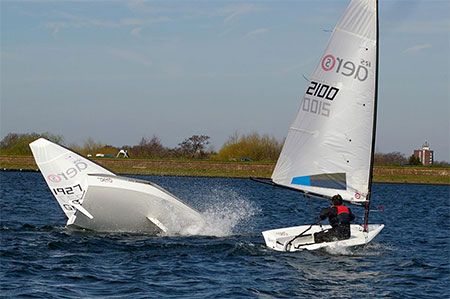 A capsize doesn't necessarily mean that it is the end of your chances; plenty of others will probably go in too, so learn to right your boat quickly. On a breezy day you may well find that the safety boat is following the race round to be at hand in case anyone gets into trouble; they may also lurk at gybe marks, possibly for the entertainment value. If you go over they will circle to keep an eye on you, but unless you are in obvious trouble they won't touch your boat without asking you first, because helping you get your boat upright will disqualify you from the race. While you are capsized or recovering, other racers must avoid you.

While on the subject of rules, do tale the time to read the rules. The basics are really quite simple.

On the same tack

Rounding marks is a bit more complex but the essence is that a boat on the inside of the turn must be given room to round the mark. That rule gets more complex so it is worth reading the full rules, but the main point is that 'inside' is determined at three boat lengths from the mark. You can't barge in late in a fast boat. Also at the start you can't barge in between other boats and the start mark (usually the committee boat).