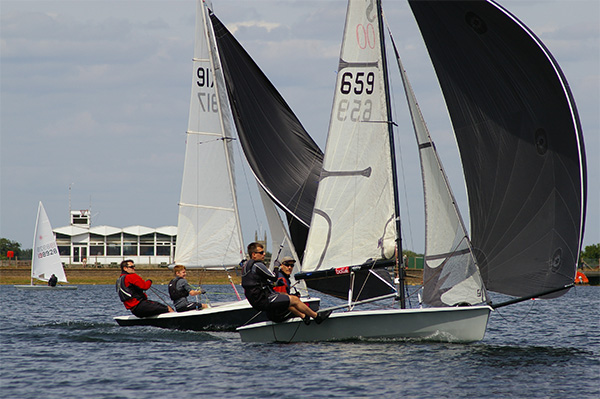 We use the RYA Portsmouth Yardstick (PY) system to handicap races between different classes and we feed back our race results into the annual returns. In the past and as advised by the system we have applied local numbers to reflect the sailing conditions and classes racing at IBRSC and we will continue to do so. Having said that we feel that the 2013 numbers published by the RYA closely match our data sets.

A note about Personal Handicaps by Jim Champ

Personal handicaps are used in our Wednesday and Anniversary series alongside the standard class handicaps. The intention is to introduce a crew skill factor into the numbers, so that a beginner can compete against an experienced helm by having an additional handicap advantage. An improving sailor should see their results improve and these two designed series should be won by the sailors who are improving their results most, not by the "best" sailor.

Personal handicaps are calculated from our results data and bands from 0 to 5 are assiged to groups of sailors and craft of similar ability. Class PY numbers are then adjusted for each band and sailor. The best estimates are provided from races where we have the times, but we also get results from untimed class races.

In Band 0 would be sailors who expect to finish at least in the top quarter of National fleets, and maybe a bit higher at local open meetings. In Band 1 would be top half finishers. Band 3 would be folk who would be pleased with a mid fleet finish in a club race. Band 4 would be folk who are perhaps still getting to grips with racing their boat. Band 5 would be beginners, or those who aren't too bothered about taking it all too seriously, and are out racing because its more fun than sailing round aimlessly. Folks who get enough stress at work and aren't interested in heavy competition.

The corrected time for each competitor is calculated as a percentage of the winners corrected time in each race. Then the percentage finishing time is averaged across all the races each sailor completed. The bands reflect the percentage differences, so a Sailor in Band 1 has their PY number increased by the amount that would reflect a finishing position in band zero. For sailors with plenty a decent number of results this system is pretty well statistically founded, and I have good confidence in it. If we have only a few results for some sailors then its much more likely that good days or bad days have skewed the results.

Where we have only finishing positions for races things are a little less well founded statistically. Rather than being based to time within a fleet the places are converted into percentages and treated similarly. Races with fewer than 4 finishers are excluded. I was a bit worried about this as a technique, but in practice the calculated bands for sailors that we have plenty of results for in both timed and untimed races correlate pretty well - better than feared, and it enables us to get figures for a lot more sailors.

Don't Agree With Your Band?

Ask Jim Champ. First, look at the number of finishes that your ranking is based on. If its based on only a few races then it won't be especially reliable, so we'll be glad to receive any evidence you can give to justify a change. Point us at some past series where you know you completed a lot of races for instance. If on the other hand your result is based on a lot of finishes then you'll need to produce some pretty convincing evidence as to why it should be wrong.

Don't Have a Personal Handicap Band?

Ask Jim Champ. We need some evidence from you as to what your ranking should be. If you are new to the club then let us know about any previous experience or results. We can give you a provisional banding and change it restrospectively when there's more evidence.

What Does it Take to Win?

Like any other series, the most important thing to do is to do plenty of races. If you don't do at least half the races, which is what is required to avoid counting DNC (did not compete) results in your score, you wll not do well, no matter how well you sail the rest of the races. The more races you do then the more good scores you have, and the more less good scores can be dropped from the results.