This is an attempt to give you a more detailed look at what all those strings round the boat are. Some boats seem to be an absolute maze of ropes, all of which can create absolute confusion to you as they get wrapped round your feet. Others have very few. To a considerable extent the number of strings tends to reflect the number of sails the boat has, so a Cherub, ISO or RS400 with jib, mainsail and spinnaker will have more strings than a Topper with just the mainsail.
Types of String

The ropes lines and wires tend to divide themselves into 5 groups.

The mast is held up chiefly by shrouds, which go from the side of the boat up to the mast, and by a forestay, from the bow up to the mast. More sophisticated boats may have several sets of wires from the side of the boat to the mast, which control the way the mast can bend. Some simple boats, mainly singlehanders like the Laser and Topper, manage without shrouds at all, but instead have a rather thicker and stronger mast which is held firmly in a deep socket in the deck. A few boats have arrangements to tighten or loosen these wires while sailing, but such systems are best avoided until you have a fair amount of experience.

Most sails are pulled up with a halyard. There may be quite sophisticated arrangements of levers and so on to pull the sail up very tightly, but basically the sail is always pulled as far up as it goes and left there. Asymmetric spinnakers also have a similar rope to pull the sail out to the front of the bowsprit, which often also pulls the bowsprit out, but the principle is the same.

Sheets basically just pull the sail sideways. There are some subtleties, especially when it comes to jibs, but fundamentally the sheet justs lets whichever sail its attached to in and out.

The control lines are what can be confusing. They are mainly concerned with changing the shape of the sail so it has the best aerodynamic properties for both the direction you are sailing in and the way the wind is behaving. The mainsail tends to have the most complex controls, and we'll use this as our example. The sail has 3 corners. One is attached to the top of the mast and is left alone. The corner at the mast end of the boom can only be pulled up and down, but the corner at the end of the boom can be moved up and down with the boom, relative to the two corners, and moved in and out along the boom. These are really the only things you can do to the sail. All of them have effects on the shape of the sail, and all tend to be adjustable to a greater or lesser degree on the majority of boats. 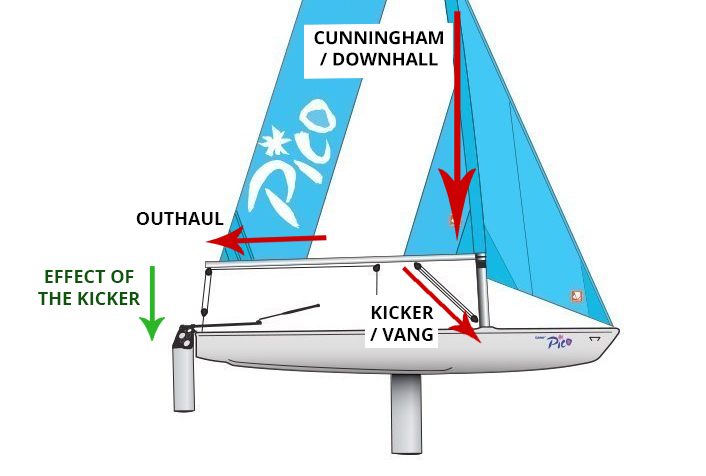 The diagram shows where they act on the boat. You'll notice that I've talked about the kicking strap pulling the end of the boom down, but actually its fitted near the front of the boom, and pulling diagonally. That's what's practical! The effect is chiefly on the end though.
What Do They Do?

This answer is made a bit more complex because the actual effects do vary according to the design of the mast and sail, and they all interact. But we can make some generalisations which are plenty good enough to be getiing started with. What all of this is most concerned with is changing the shape of the sail, making the curve in it flatter or fuller, according to the wind strength. When an airliner wishes to travel more slowly for landing it lets out a whole array of flaps and other devices at the back of the rigid wing, to give it the effect of being more curved. While it is travelling quickly in the main phase of flight it keeps them retracted to make the wing flatter. We need exactly the same effect on our sail, but have the advantage of being able to change the shape of the whole "wind" because it is made of flexible sailcloth. Some sailors, usually those with an engineering background, get immensely involved with all this science, quoting Reynolds numbers and goodness knows what else. Others very often sail past them relying on feel!

The cunningham, pulling the luff of the sail down the mast, tends to make the sail flatter at the front, and to a lesser extent the top of the sail. It tends to be pulled on most sailing upwind and in stronger conditions, and left looser in light winds. On the more sophisticated modern race boats, typically those with sails made of mylar, which is a transparent plastic, the cunningham also bends the top of the mast, which helps reduce the power of the sail in strong winds so you get blown over less.

The kicking strap, which pulls the boom down, is the one that you are most concerned with while learning. It has a vital role in keeping that mainsail under control. One of the features of a mainsail is that, because it is pulled in at the bottom, it tends to be pulled in more at the bottom than the top and middle. This phenomenum is called twist. If the kicking trap is too loose, then when you pull the bottom of the sail in for a beat, the middle of the sail will only be pulled in enough for a reach, and will flap and you will go slowly. Worse still, if you are on a run, this top of the sail will be blown forwards, and actually try and push the boat over on top of you. In addition it will tend to flap when you are near gybing, and maybe blow the boom across before you expect it. So it pays to have the kicking strap on pretty firmly while you are learning.
Once you get a bit more involved in racing the kicking strap becomes even more important - its always the most important of the three. For laws of physics reasons that I won't go into the wind blows more strongly at the top of the mast than the bottom. The twist helps the sailor to allow for this. The twist can also enable the sailor to let the top of the sail loose on upwind legs, when the boat is overpowered. In that situation the kicking strap may be tightened up on downwind parts of the race, because the boat is blown over less. In addition, and especially on the older design boats like the Laser and Enterprise, without those mylar sails, the kicker is used to bend the mast and flatten the sail. This also reduces the power in the rig. So on some boats you tighten up the kicking strap when you're being blown over, and on other boats you loosen it. No wonder the subtleties of this can bring you enjoyment for a lifetime!

The last control, the outhaul, is the simplest to understand. It just pulls the sail out along the boom, and makes the sail flatter, esepcially at the bottom. This is basically pulled out in stronger winds.