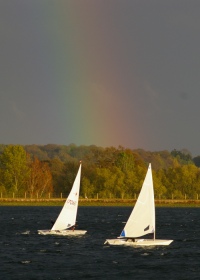 Serious breeze on arriving at the club… A southerly, with the waves breaking on the shore in front of you, always feels that little bit stronger than windfrom other directions, but there was plenty to intimidate with 35knots coming up quite regularly on our new digital anemometer and matching rain squalls… Well, not everyone was going to go yachting, and who can blame them…

On the other hand the sun did come out from time to time, and during the pre start the low sun and rain in the distance produced the most spectacular of rainbows with a huge, almost semi circular arc crossing the sky. I understand the competitors were a bit preoccupied and didn't notice!

The keen end of the Solo fleet was running the racing, and in the end there were no starters at the first gun. Two Radials and one full rig Laser started, with Kevin Pearson and Paul Wright Anderson destined to have a ferocious battle on the water round the first couple of laps.

The fast start was best populated – two RS200s, a Phantom, an EPS and an RS600. The RS600 shot away up the first  beat, but had to retire with a shredded main halyard just before the windward mark. Carl Mayhew’s RS200 was the pick of the remaining bunch, building up a lead quite quickly and hammering round the course, although Richard Barker’s Phantom was in contention.

Results… Well it wasn’t altogether a surprise that Kevin Pearson won handily, using his Radial rig.. In the end he had the fastest time on the water, never mind subtleties like handicaps so it was a very thoroughly deserved win. With only band 0 and band 1 competitors finishing the race he also won the personal handicap: indeed the top six was the same for both scoring systems. Paul Wright-Anderson, in the full rig Laser was 2nd, Carl Mayhew 3rd, Richard Barker 4th (so you’ve avoided having to write the report Richard!) Mike Curtis, in an RS200 5th, and Mike Storey 6th with the EPS. The full results are here. 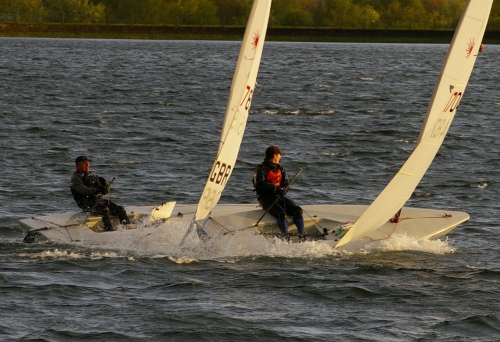 [Photo: Kevin Pearson gets an inside overlap and the lead on the water at the leeward mark. © Jim Champ]

The evening concluded with a glass to drink and evening meal supplied by the Smiths, and excellent it was too. Thank you. Lets see more of you next week and hope for slightly more equable weather.