Serious breeze, averaging around 20 knots by the clubhouse anemometer and gusting into the late 20s at least. CJ Cavallari from Island Barn took an early lead, and kept it for the first lap of the old Olympic (triangle/sausage) course. He got the wrong side of a shift on the third beat and dropped to 4th, with Iain McGregor inheriting the lead and Mark Ampleford and Simon Lomas-Clarke taking second and third places. However 2nd and 3rd got in a horrendous tangle at the leeward mark which ended up with both boats horizontal, some damage, a retirement and CJ gratefully accepting the places back again…

After lunch the wind built some, and before the start of R2 the meter showed a sustained gust of 35 knots.

The race started in an average speed of appreciably over 20 knots.  Much entertainment ensued at the first wing mark, as the majority of the fleet piled in on a big gust. And then had to gybe. At least  four of the first seven, including I think at least the first three,  went in either gybing or taking emergency avoiding action, with Iain McGregor inheriting the lead as boats scattered around him. The photo at the bottom of the page is from this mark rounding...

By the second lap 2nd and 3rd had hauled McGregor right back, but not enough to prevent him taking the gun and the event. These two both fell over at the last gybe, just before the short hitch to the line, and in the end Roger Lumby took 2nd and Godfrey Clark 3rd.

What with breakages (1 sail, 1 boom, 1 hull and 1 tiller extension at least) and tired sailors the fleet was a bit depleted for the last race. One should mention - but not, I think name - the competitor who rushed into the clubhouse after breaking a tiller extension in the second race. Armed with a borrowed tiller extension he rigged the boat again for race three - and discovered that the breaking extension had ripped a large tear in the foot of his mainsail: game over. The edge had gone off the wind a bit, and, I suspect, the edge off some of the sailors as well, and there weren’t quite the dramas of the earlier races.  Iain McGregor led round the entire race to register a clean sweep. At the finish CJ held off a fast charging Godfrey Clark for second place in the race and series (and first local boat), with Clark taking 3rd in the race and overall.

The results are here. 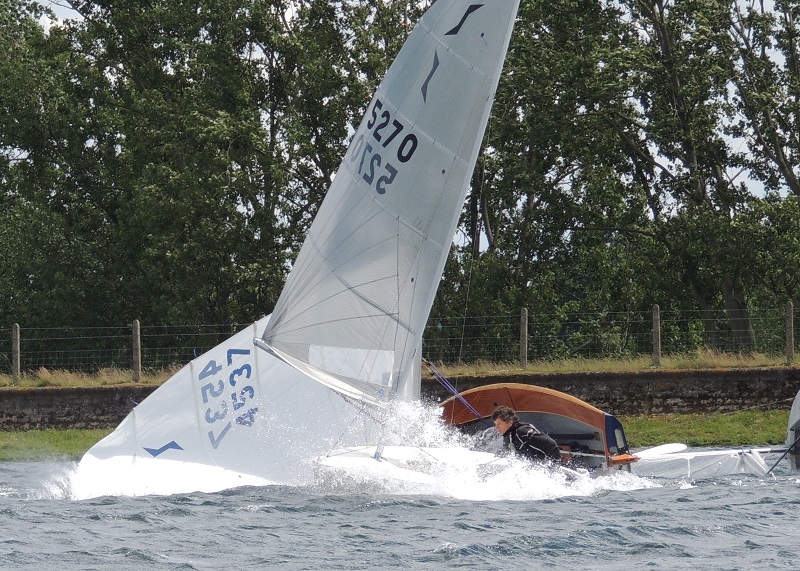