Hope you all had a great Easter break and are now fully charged up for the Spring series... Regular race this week (next week will be Anniversary series so make sure you know the start times...)

Course was nice and simple, 8, 5, 3, 1 (originally first mark was 7 making it a nice easy sequence to remember but the wind had come round so wisely the beat was changed.) The line looked to be slightly port biased most of the time so I had decided to start that end. CJ in Paul’s boat obviously had similar ideas – from the training I think CJ showed as the most consistently good starter – I’ve been trying to work on that since. Off the gun CJ had the pin but I was travelling marginally faster so that as we hardened up it was very even. I was to windward but his nose was in front. Because I had anticipated that he would be quick I elected to drag race out to the left with him although it looked as if those starting further up the line had got a good lift that we never saw.

Off the start: JUST BEFORE THE GUN – note sails nicely eased but starting to gather speed. 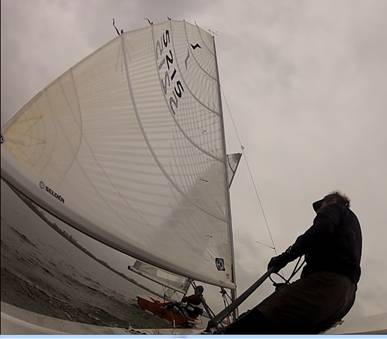 JUST AFTER THE GUN 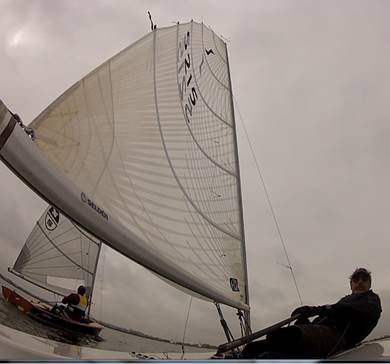 Note that we are about even – camera on the transom shows CJ is ahead but to leeward. He will want to get into my lee bow and I will want to roll over him. Classic start of race pure boat-speed competition. 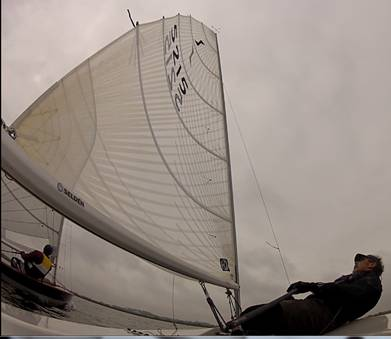 Note that I have gained a fraction – I’m trying to go fast but at the same time not drop down and let CJ either get my lee bow or simply luff as leeward boat. I daren’t get too close. Being able to choose whether to point or foot fast is very useful. To point I sheet in a tad more, plate down more add a touch more kicker and perhaps heel a bit more. To foot fast I set plate leading edge vertical, ease slightly to just let the top of the leech open a fraction and sail very upright.

Just after that picture I got a slight lift that CJ didn’t seem to pick up – in the next 10 seconds (literally that’s all) I pulled out to windward: 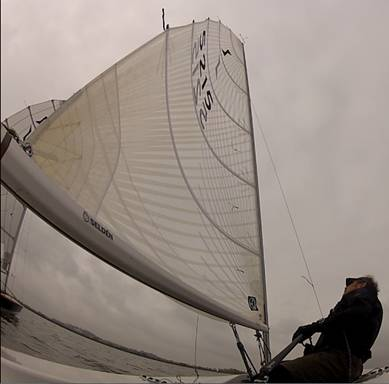 Thirty seconds of lift and I get slightly headed – given most of the fleet has gone right to some degree I wonder if it’s time to take the header and get back in touch with the fleet (who are looking good). I don’t know if CJ missed the lift or just didn’t get it. The shioft were sometimes that localised that he may have just not got the lift. The rest of the fleet had seemed to get a lift just after the start but I had elected to stick with CJ. I decided to stay on a little longer because the header was very brief and I got some pressure again. Now it’s two minutes after the start and I decide to take a small header and get back in touch with the fleet. 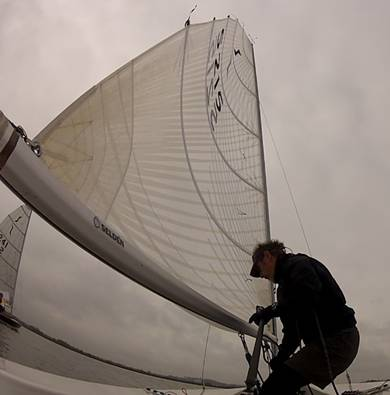 Preparing to tack. Stand up add a bit of heel to help the boat rotate (then start to turn easing sheet slightly and pulling boat upright and over as she tacks). 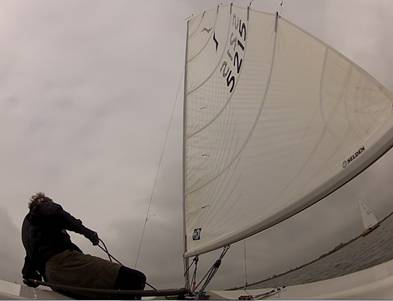 Coming out of the tack – tiller is still behind my back. Pulling the boat up out of the roll tack – note the main is not sheeted too tight (the sail will stall as you bring the boat up if it is not eased). As the boat comes upright I’ll sheet back in. Roy looks good but I think I may have the rest. 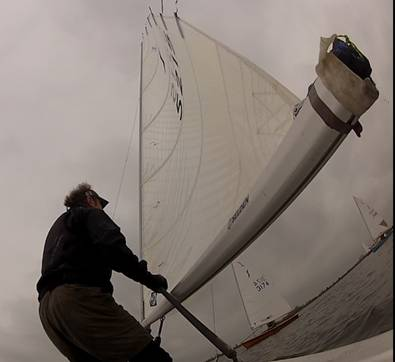 Only been on port for about 15 seconds but I’m being headed and Roy will definitely cross me – Dave C also looking good. I decide that Roy’s on the right shift so I tack back. Roy however tacks off – perhaps worried that I would get his lee bow – from where I was that surprised me. I hook into the shift he’s on and get good pressure for a few seconds. Twenty seconds later I tack back and this time I’m crossing the fleet and being lifted towards 8. I make one more brief tack onto Starboard when I get headed – just on starboard for about 10 seconds before switching back to port on the lay line. 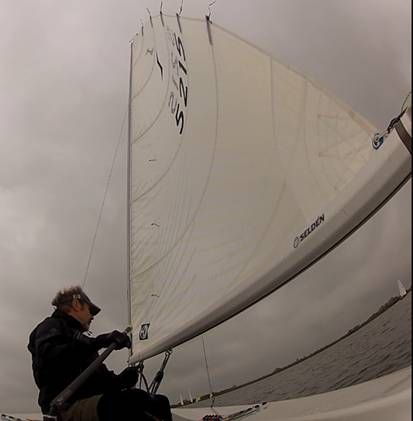 You can just see Roy (I think) and a couple of lasers almost dead ahead. The wind dies close to the shore. After I made the extra pair of tacks as the wind shifted I was lifted up to eight and almost caught the lasers. Roy and Dave were in the light and shifty wind nearer the shore.

What surprised me about reviewing the video was how short many tacks were – 3-4 seconds through the tack then perhaps only 10-20 seconds between tacks as the wind shifts. That makes the efficiency of a tack even more important.

I’ve said it before, it generally pays when beating to mark 8 to approach on port. Don’t quite know why but nine times out of ten it’s even or lifting on port. The tricky part of course is the actual approach – no rights and a need to tack. Timing a gap is important but it is also critical to know the rules when you tack inside the zone. If you tack under someone within two lengths you may not make them sail above close hauled. Also if they are coming in quickly from behind they can come under you and claim water. However if they are slightly over-standing you can tack under them and make them beat to keep clear of you (you are leeward boat). What you mustn’t do is be in anyone’s way while you are actually tacking or when you are on port and they are on starboard. Perhaps a detailed view of the rules round the windward mark would be a good topic for a future blog.

May you Sunday or I may go to the open at SilverWing – depends on the forecast.