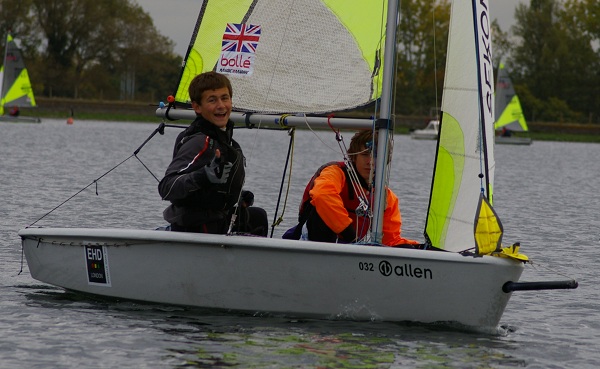 One of those days that served up a good variety of things, sunshine, rain, wind, calm, oh and race winners - four different winners in the first four races...

The same configuration was used for the course all day - basically a windward/leeward with a spreader mark at the top and a gate at the bottom.  The gate seemed to cause some confusion to the less experienced sailors in the fleet, although it did provide opportunities for late changes of plan when the late gybe or spinnaker strike went horribly wrong. It also set up some significant place changes when people chose the correct side of the gate (by luck or judgment).

Katie Davies and Julia Estaugh pulled off a textbook start in race 2, spotting the wind shift that favoured the port end and starting bang on the line and the pin at full speed at the gun. They crossed the fleet and then put in the covering tack to consolidate the gain. Twin sister Isabel Davies, with Lucy Circle as forward hand, took the lead by the end of the first lap and kept it to the end of the race. James and Ben came through for 2nd and Sam and Oliver Lythgoe from Wembley claimed 3rd.

After lunch, with the wind improving, race 3 went to Iain and Jake with Alex and Billy 2nd, and Isabel and Lucy 3rd.

Race 4 saw the most breeze, with a huge dark cloud bringing welcome breeze and considerably less welcome rain.  It also brought technical problems and swimming opportunities to some of the competitors. James and Ben managed to climb from fourth to first as the wind built up in the rain squall, making good use of the extra weight in the boat compared to everyone else. They then took the option of heating up on the final run, only to find the wind dropping as they got to their gybe point. By contrast Sam and Oliver soaked low for the whole run and easily came through as the wind dropped, making 4 race winners in 4 races.

Race 5 started just after the cloud went through, and unfortunately it took all the wind with it, so the last race was something of a drifting competition - rather a low key end for a hard fought series. James and Ben drifted best by a small margin, and took the series. Iain and Jake were second in the drifting and second overall, whilst Katie and Julia were 3rd.

Here's a gallery of some of my favourites from the shots I took, resized mostly cropped and trimmed suitably. The full selection in unaltered format are on the club Facebook pages.

Thanks to Peter Curtis for additions to the original report.