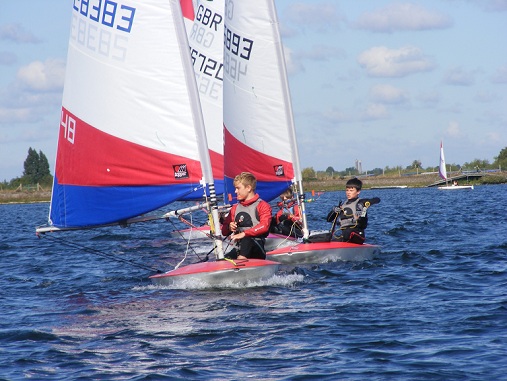 The weather was beautifully sunny but almost calm as 47 competitors arrived, but a Force 1 to 2 breeze filled in, to enable the racing to start on time. A lot was at stake.

Being the final Topper South East Area Traveller, the event would decide the series winner as Clive Jackson (Papercourt) and Harriet Ward (Queen Mary) were tied on 8 points each after the penultimate event, Jackson leading on count back.

This was also a qualifier for the RYA South East Topper Zone Squad.

Harriet Ward started in style with a first, with Clive Jackson back in tenth. She pressed home her early advantage with another first in Race 2, taking lunch as a clear leader on 2 points, with home sailor Nancy Scott second on 5 points. Light wind rewards light sailors and Jackson, though of the Bradley Wiggins build, puts considerably more load in his Topper than Ward does in hers. How Jackson would have liked the event to have been held on the following day, when 18 knots of wind was forecast.

The light winds continued after lunch. But an added ingredient was a tricky wind shift pattern varying through 45 degrees throughout the afternoon. Patrick Croghan (Queen Mary) was in his element. Not only could he read the shift pattern better than anyone else, he was one of the lightest sailors on the course. So his well crafted leads at the first windward mark in Races 3 and 4, extended into big leads by the end of each race.

With one race to go and a discard already counting, Ward led on 4 points, with Croghan a single point behind. Michael O'Driscoll (Crawley Mariners) lay in third with a consistent 10 points, one point better than Scott on 11. Jackson's Traveller Series quest was all but over with a score of 16.

So, with the Traveller Series pretty well wrapped up, at stake in the last race were the Event prizes only. But what a final race we had. Croghan took an early lead but Ward and Scott harried him and each other for three laps. On the final run Scott passed Ward, depriving Ward of her points lead and hoisting herself above O'Driscoll overall. Croghan sailed on to his third afternoon win, which won him the event, with Ward a close second, Scott third and O'Driscoll fourth.

The Regatta Fleet was won by Coco Barrett from Desborough and her clean sweep of firsts should qualify her for the big fleet next time.

Results were a bit delayed by a protest. But the chairman Jim Champ, stated it was a pleasant experience due to 'the sporting attitude of the participants and the way they were quite happy to accept their colleagues could have a different recollection of events than themselves. They all deserve full credit for that.'

So the Final Traveller Series Shoot Out billing did not quite live up to its publicity. Harriet Ward's second place won her the South East Traveller Series convincingly by 2 points and Clive Jackson repeated his feat of 2011 by finishing the Series second, a, non-the-less, great achievement for an adult.

and lots more photos are here.