The Clipper Round the World Race is recognised as being a tough gig. Maisie joined the boat Dare to Lead in Subic Bay, Philippines in early March 2022. She joined one of the toughest legs – crossing the North Pacific. Arriving 7,226 nm later into Seattle (USA) on 24th April 2022. Maisie had stepped up to be a watch leader for the boat, on what turned out to be the longest race in Clipper history. 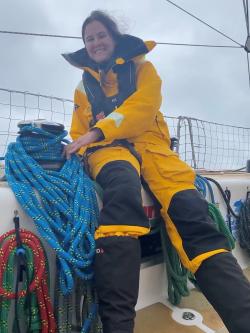 Life on the Ocean can sometimes echo life on an inland reservoir….in some ways. The wind can be fickle, fluky, strong, blowing the wrong way, shifting; or even none at all. The one thing you won’t get inland (well, at IBRSC) is regular 4 meter swell (which became the norm), flying fish jumping across the boat, sunsets of sea and sky, lone albatross’ cruising the sky, birds landing on the boat inviting themselves into the galley, pitch black nights with no moon and following seas, sailing in 50 knots of wind, early morning sail changes in pitching seas and swarms of dragonflies and sea sickness.

The trip across the Pacific saw all kinds of wind and weather. Heading north, and leaving the heat of the Philippines and passing Taiwan meant sleep became more easy. All too soon, the temperature began to drop. Turning east off of Japan and heading out into the North Pacific, rolling storms of rain, hail and sleet became everyday occurrences. The temperatures dropped to zero, and life on board a boat at 40 degrees, crashing through turbulent and uncompromising seas, became the norm. Everyday activities, such as eating, sleeping and going to the loo, presented new challenges. The boat crew were split into watches, working on a 6,6,4,4,4 hour basis. 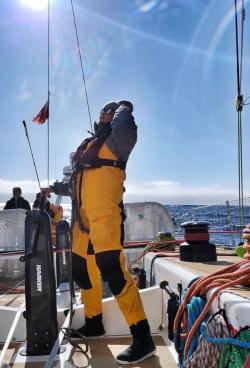 What the trip did prove was Maisie’s capabilities as a sailor. Her experience and knowledge meant she was adding value to the skipper and Additional Qualified Person (AQP) of the boat at all times. Providing her input, helping to guide the crew as they crossed the Pacific.

As many sailing careers do; she started learning to sail in an Topper. From small acorns…

Maisie is going to continue her adventure – replacing the AQP on Qingdao, another boat taking part in the Clipper Race. She’ll be joining the boat in San Francisco – where the next stages of the sailing adventure will go to Panama, Bermuda, New York, Derry and arriving into London around 30th July 2022.

Maisie, Colin and Hillary after arriving in Seattle 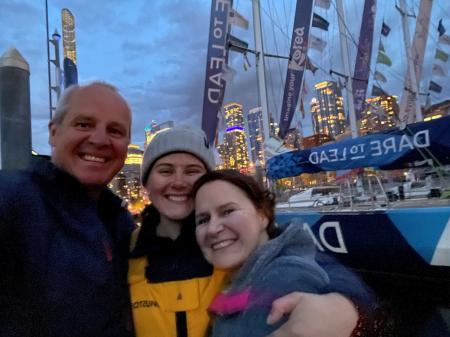