Or to be precise the Sustainability Challenge Aero Open and the Optimum Time Watches Phantom Southern & Eastern Travellers.

The Sustainability Challenge is a joint project between the RYA and the British Marine Industry. Its at least partly about heading off threats to our sport from environmental issues., notably invasive species.  Yeah, I know, latest greenie stuff and all that.

Well consider this - you know those damned zebra mussels that grow all over everything and cut your hands to bits when doing anything with moorings? You guessed it, they are an invasive species, and there's a risk of acquiring a  bigger and sharper variety. And its not hard to imagine what they are doing to all Thames Water's pipes and mechanisms,  or whose water rates pay for dealing with them.

Something I've  noticed is that in the last two or three years we've gained a population of what one might call tiger shrimps. These aren't the notorious killer shrimp, but they are another invasive species, and the native shrimp is getting rather rare in the reservoir. Do we care about what sort of shrimp is wriggling in the bottom of the rescue boat? Well maybe not, but ecology is tricksy and if a huge population of aggressive carnivorous shrimps heavily reduces the numbers of plant eating critters then we may get an awful lot more weed growth, and I think we care about that! So please everyone, do clean your boat down entering and leaving, especially if you are going to and from other lakes and reservoirs. Salt water venues are less of a concern. We're not responsible for the  tiger shrimps BTW, they've been spreading round the Thames so it was inevitable they'd get to us. Anyway, I digress, back to the sailing.

An extraordinarily chilly day, featuring snow and breeze and windchill.  I looked out of the window first thing and didn't believe anyone would race, but a dozen or so hardy souls rigged up and sailed, with some even more hardy souls doing the race management. I think its the first time I've ever seen a safety boat equipped with a hot water bottle!

Should have a bit of a report later, for now, here are the results... DNS in the first race means they rigged in the snow, launched the boat and at least sailed out there before discretion, or incipient hypothermia precluded further competition. Other early departures were caused by ripped sails and broken tillers, it wasn't just the weather (although that would have been enough for me).

There was plenty of breeze, with gusts over 20knots at times, and to make it even more interesting the north-easterly is not the steadiest of directions at Island Barn. The windward mark area was very shifty, as locals would expect, whilst the top wing mark was also in an interesting place - it was just close enough to the bank for the breeze to be reduced in strength a little by the wind lifting up, but within a few yards down the run - perhaps about the point people started thinking about gybing - it came roaring back down again, and with eddies too. Good spectator value!

Jeff Davison won the day handily, with three firsts overall on handicap in the Aeros, and of course in the 7 class too.  After a glitch of course reading in the first race John Oldham took the Phantom series with one of his competitors so keen to find an excuse to retire that he destroyed his second best sail! Toby Scholfield was first in the Aero 5s and Gareth Griffiths the Aero 9s.

Here is an album of photos both by Jim Champ and Paul Wright-Anderson, and here are a selection of my favourites from both of us. 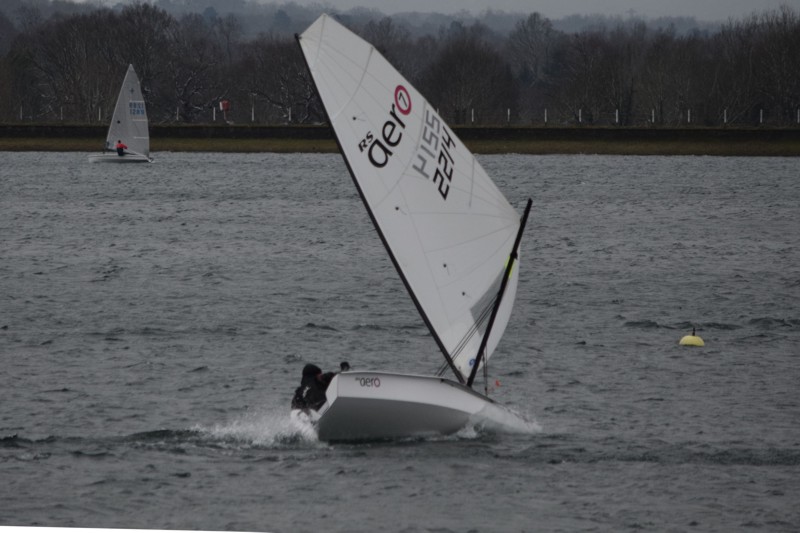 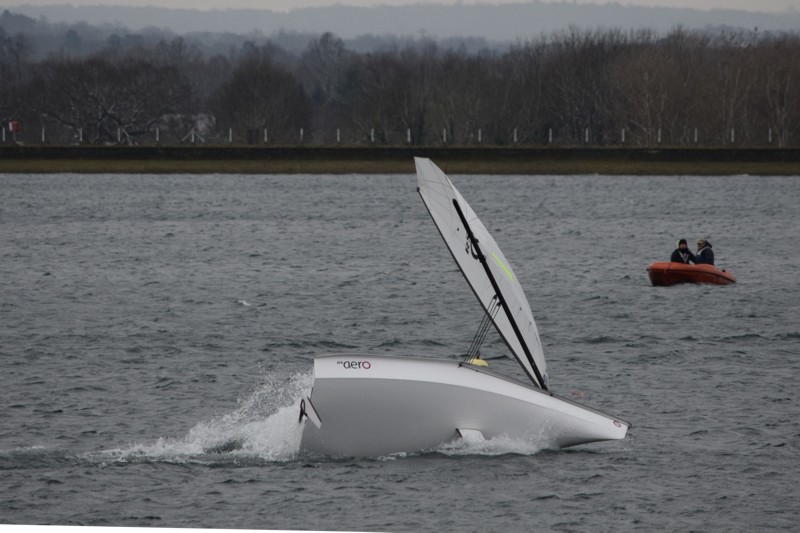 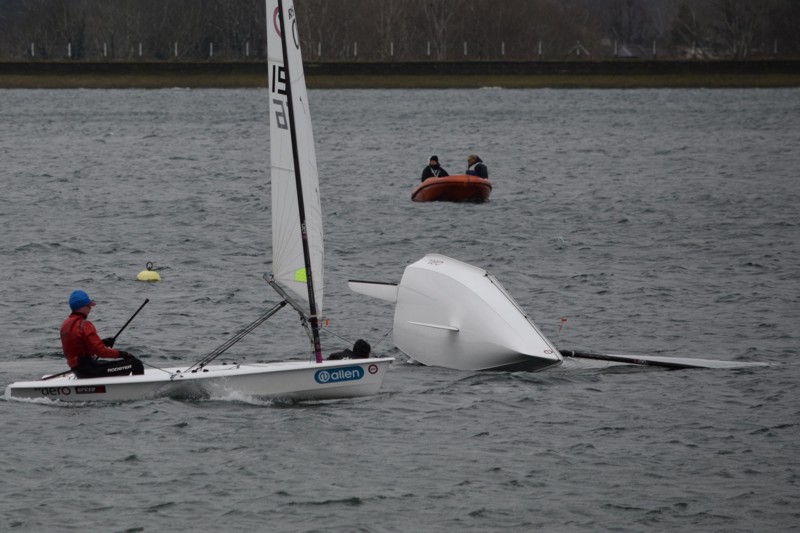 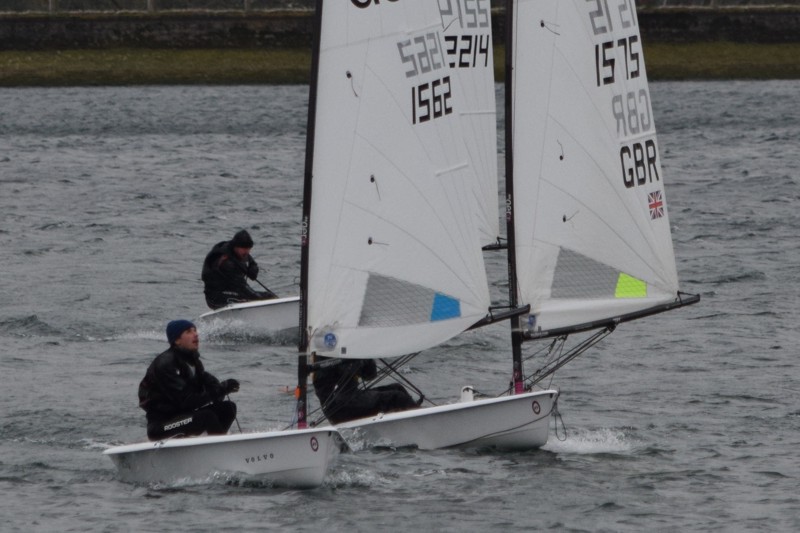 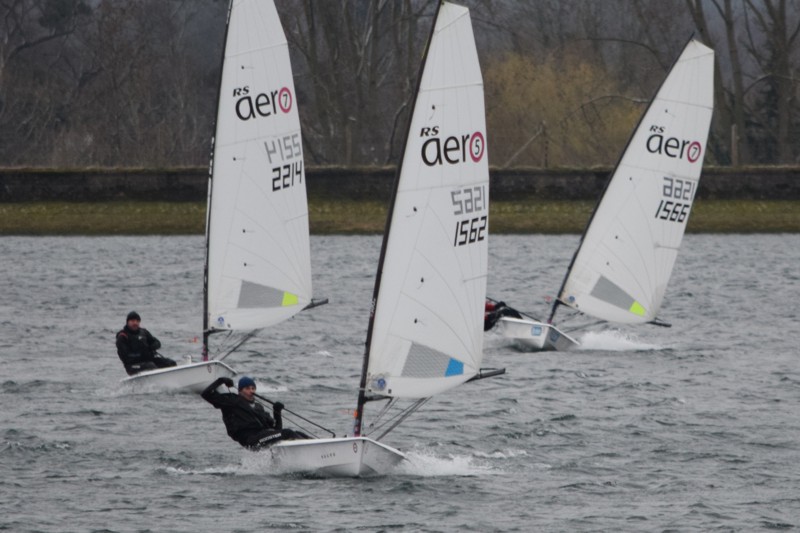 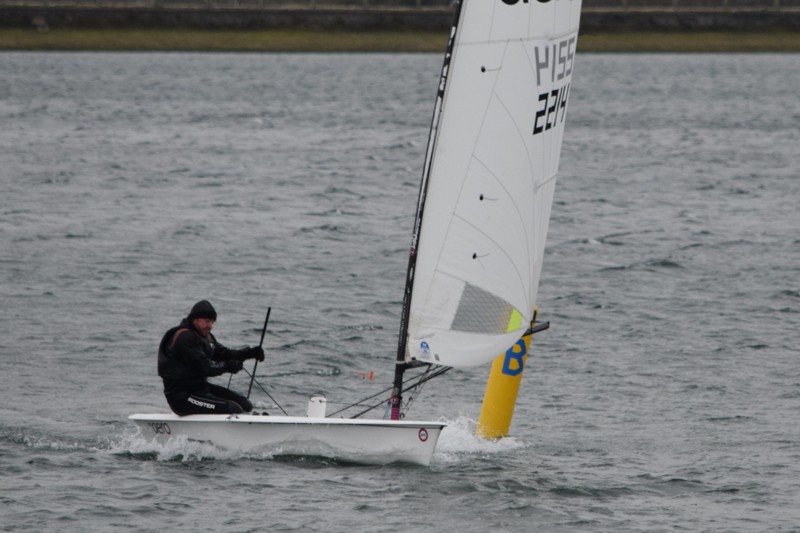 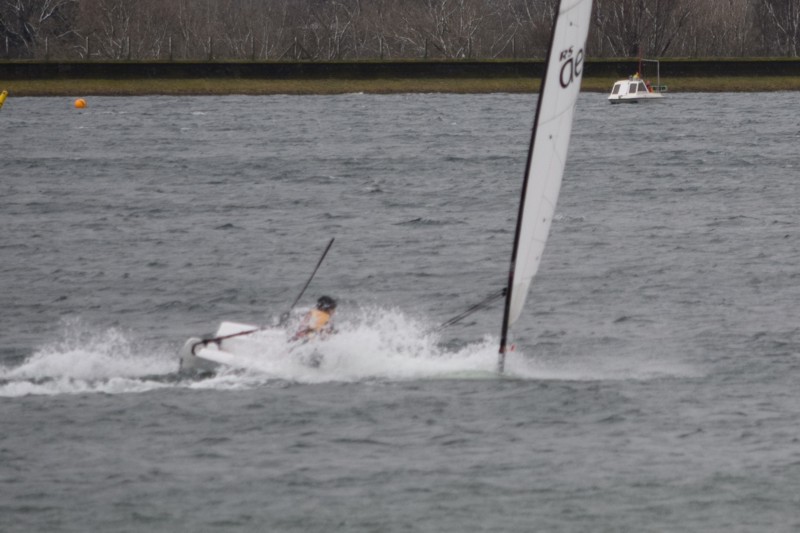 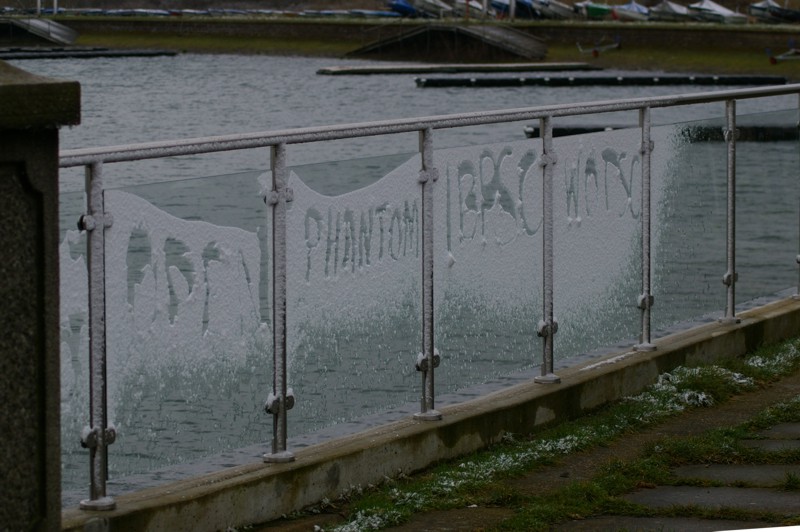 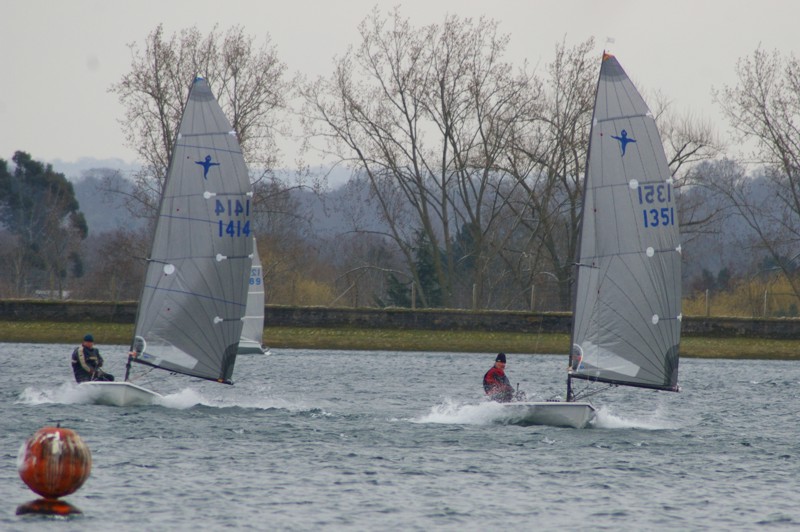 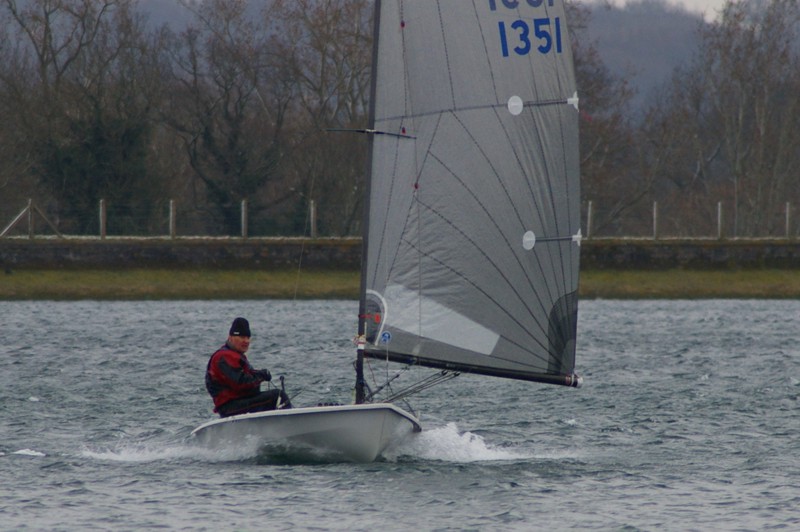 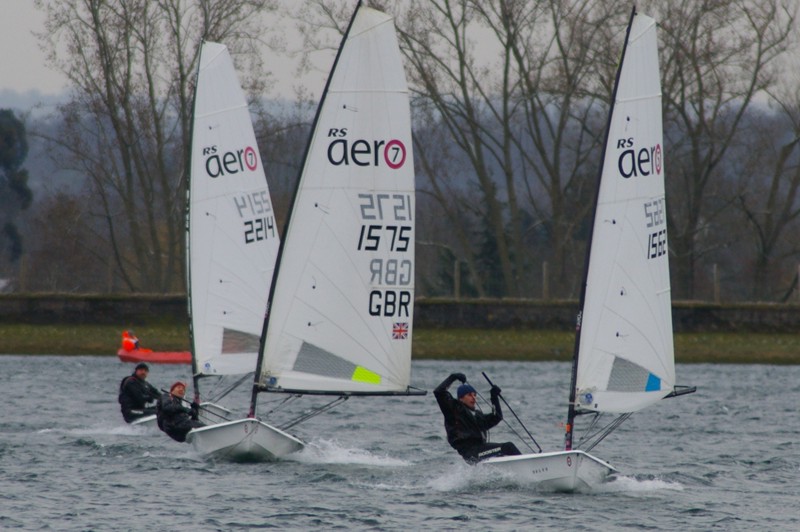 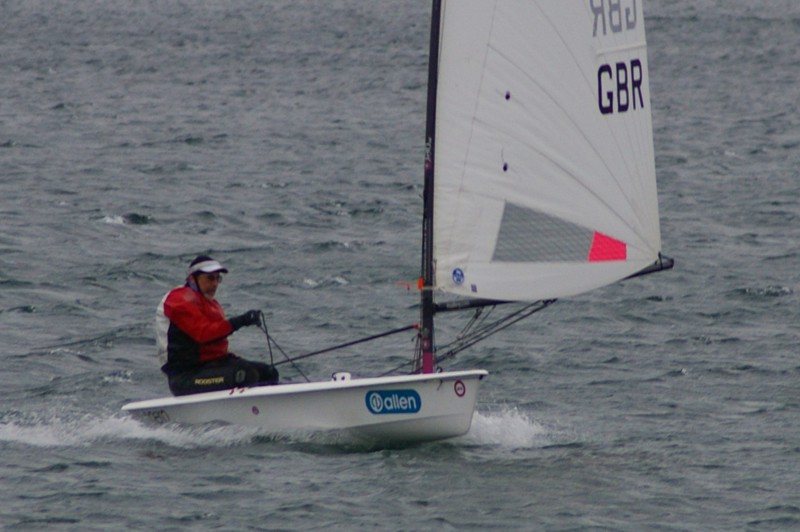 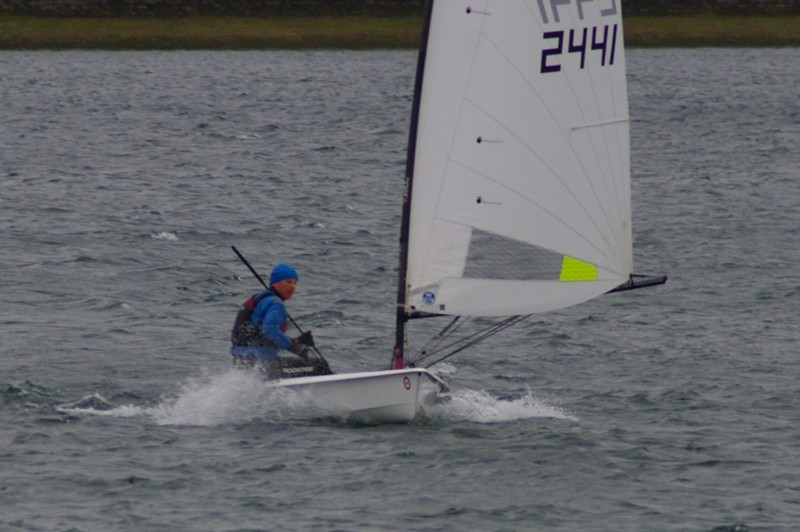 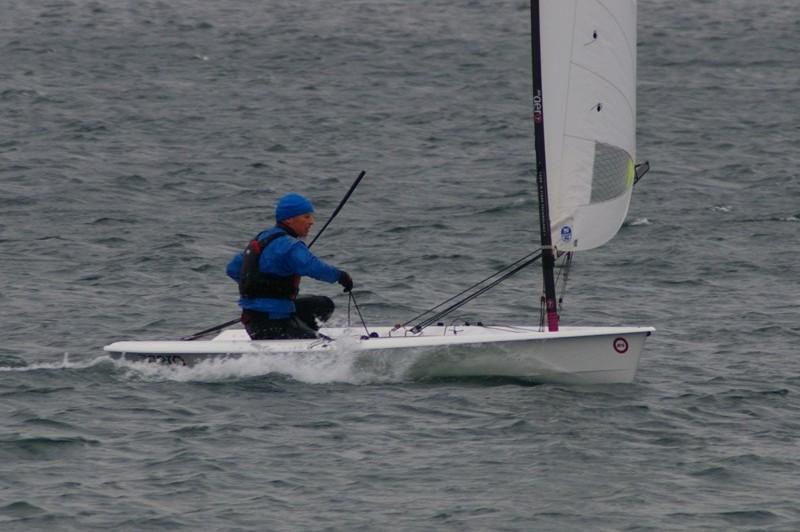 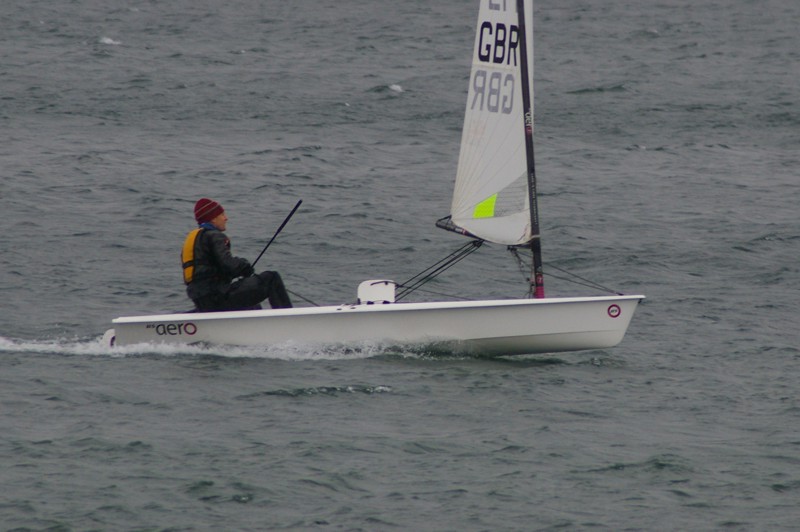 Here is a Yachts and Yachting report from the Phantoms.

And here is Gareth Griffiths' report for the Aeros:

They say mad dogs and Englishmen go out in the midday sun – well they also go out in the freezing cold… Saturday 17 Mar – yellow warnings of snow and force 5-7 may have put off some entrants but the Sustainability Challenge Aero Open at Island Barn went ahead.  There may have been fewer boats but the competition with the elements was fierce. Some stayed ashore, some rigged but struggled to launch however despite the weather all three rigs were represented with local sailor Gareth Griffiths electing to stick with the 9 “My fingers were too cold to swap rigs”…

At the briefing it was decided to drop down to three races back to back to avoid a cold start after lunch and to give travellers an earlier start on what could be a tricky journey home.

With the wind as forecast generally around 20 knots but with big squalls there were a few capsizes even before the start.  Off the gun the 9 showed its pace starting at the pin and pulling away winning on the water but the gap was not quite big enough with Jeff Davison taking the win on handicap by just 12 seconds from Gareth with Mark Carelton (Papercourt) third and Toby Schofield battling round in the only 5 to finish.

Race two started with a similar pattern with Gareth again taking the pin end but Jeff heading the 7’s. It looked to be going the same way until Gareth capsized to windward in a huge header letting Jeff take the win on the water from Gareth with the improving Tim Hine (Lymington) close for second on handicap.

With the wind now starting to howl and sailors getting tired race three started with a familiar pattern but this time the 9 couldn’t pull away and the leading pair of 7’s of Jeff and Tim took line and handicap honours with Gareth 3rd.

Overall that made it