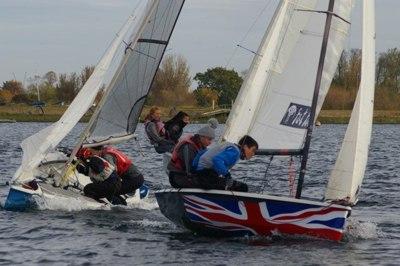 Autumn sailing has its own special character. Most notoriously, at least for my contemporaries, its equinoctial gales at Plymouth and full on sailing outside the breakwater. But that was another time, and other classes. Today it was the first frost, and the nip in the air at rigging time at one end of the day, and a marvellous golden glow across the sky on the way home at the other. And this being the age of social media and universal phone cameras, if you missed the sunset there will be a hundred photos available on the usual platforms. In between we had a lovely mild and bright autumn day, with sunshine appearing and disappearing through high cloud, and a moderate westerly wind that served up some very competitive racing. Mellow and relaxing, like the colours of the leaves on the trees...

There were twenty entries, and one thing I noticed, doing the entries, I think this is the first event I have ever scored where the Ladies outnumbered the Gentlemen in the racing boats, and I was very pleased to see it. The way things are going we'll need to rejig the changing rooms, and a good thing too.

Anyway, the racing. The course for the day was a conventional windward leeward with a spreader mark at the top, a gate at the bottom and a short reach to the finish line, mostly after 3 laps.

Andy and Jill Peters (QMRSC) led round the windward mark for race 1, with Tim Ellis/Amy Seabright and David Jessop/Sophie Mear ( Grafham)  in the close vicinity. By the end David & Sophie had taken the lead and won by a short distance from Andy & JIll, with Andy Barnett and Jo Lloyd, from the home club, having worked up to third.  4th were Simon Cory and Denise Judd from Downs, 5th Julie Harrison and Liz Birtles, mainly from QMRSC, whilst Tim and Amy had slipped back to 6th.

Race 2 I think it was saw a general recall, with the fleet having decided there was more than enough bias for a thorough crush at the pin end. From then on the I flag was out, which proved sufficient to keep things within bounds.  David and Sophie took this race as well, and doubtless retired to lunch content with their morning. Tim/Amy were second, and third Andy/Jill. Alex Beaney and Hannah Liptrot (Wembley) were 4th Andy and Jo 5th, and Joseph and Benjamin Bradley from Hill Head rounded out the top 6.

Lunch followed on a generous, maybe even over catered scale!

Race three saw the first blip for David and Sophie, being over the line at the start and having to thread back through a tight pack. Tim and Amy took the win, with Andy/Jill second. Alex /Hannah were 3rd, Andy/Jo 4th, and 5th went to Julian Bradley and Helen Cafferata (Wembley) with David and Sophie recovering to 6th.

David/Sophie won again in race 4, with Andrew/Jill second, Tim/Amy 3rd and Andy/Jo 4th. Jo/Benjamin were 5th and Julian/Helen 6th. This left David and Sophie very much in the driving seat, provided they stayed at or near the front. With a 6 on the card a bad race would let Andy and Jill or Tim and Amy, who were tied for second at this stage, go past them. There was another well fought start, and perhaps unlucky to be picked out were CJ and Uta from the home club, who consequently were to get scored OCS. In the end Andy/Jill won, which secured them second place, but David/Sophie were 2nd, which was enough to take the event by a couple of points. Tim and Amy were 3rd, which gave them 3rd overall, Andy and Jo 4th, for 4th overall, and 5th Julian and Helen. Sixth across the line, in what would have been their best race, were CJ and Uta, but they were greeted with the dreaded silence. Alex and Hannah inherited 6th, and comfortably took 5th overall.

Here's a gallery of some of what I consider to be the better photos. 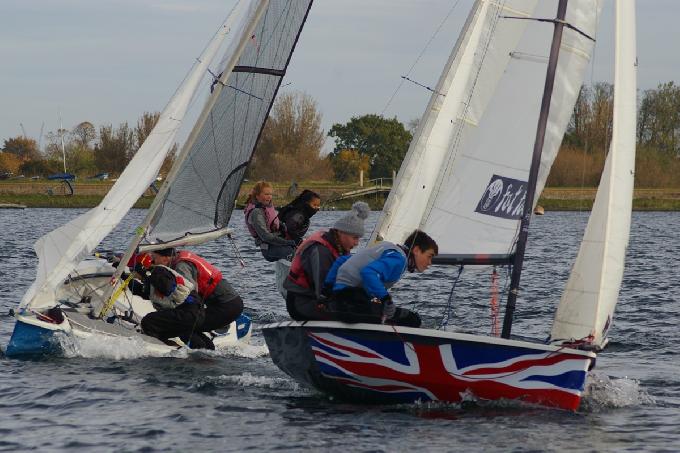 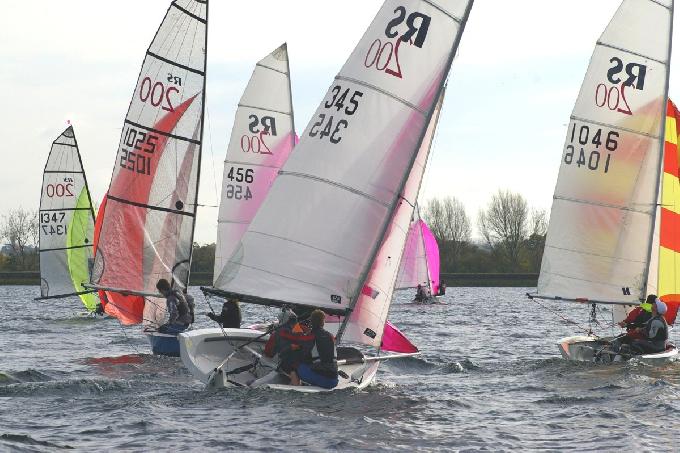 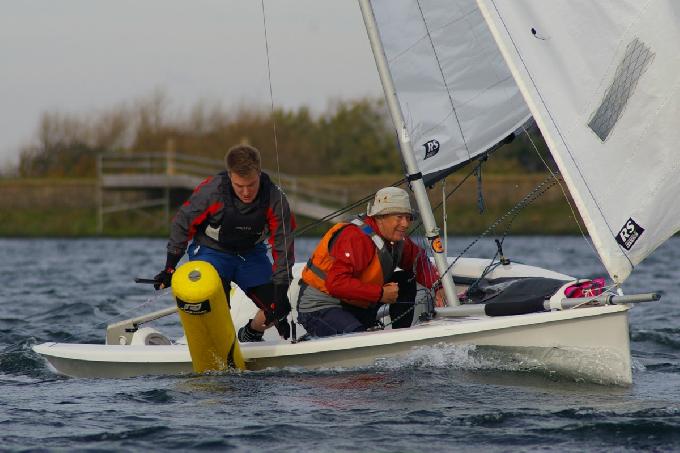 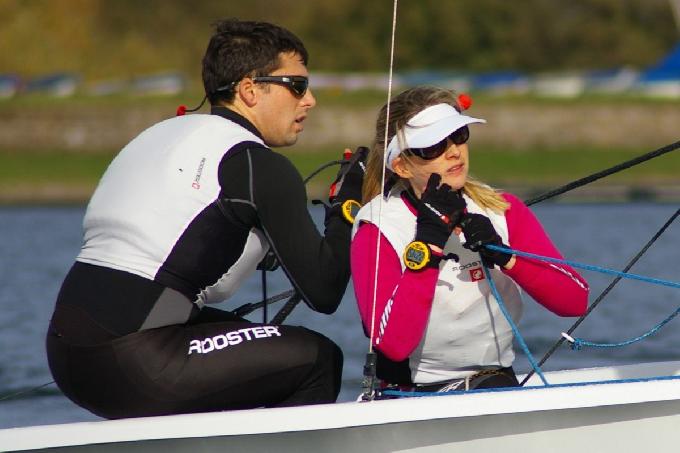 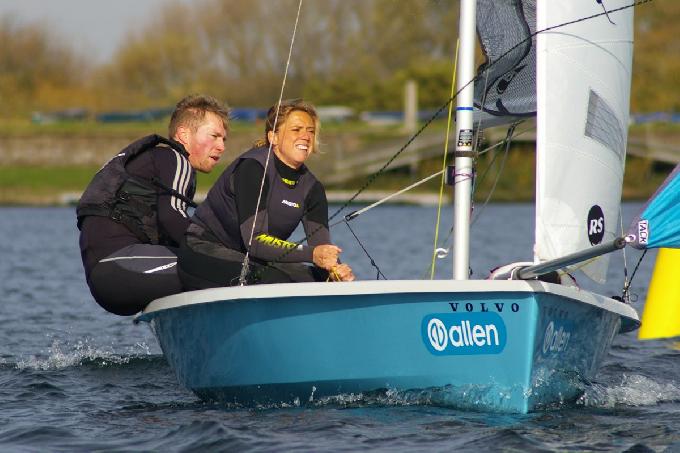 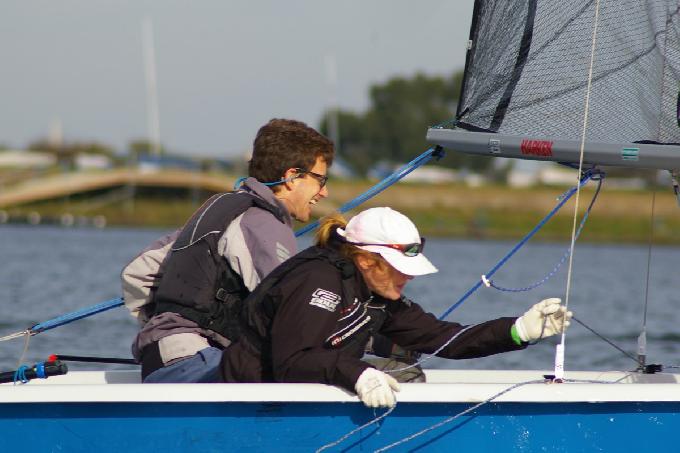 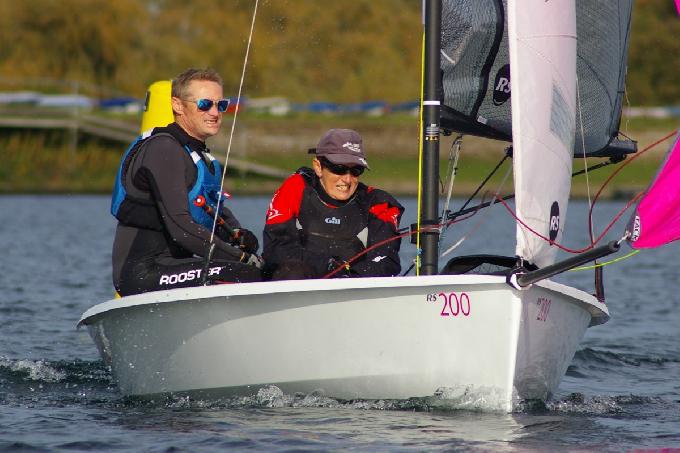 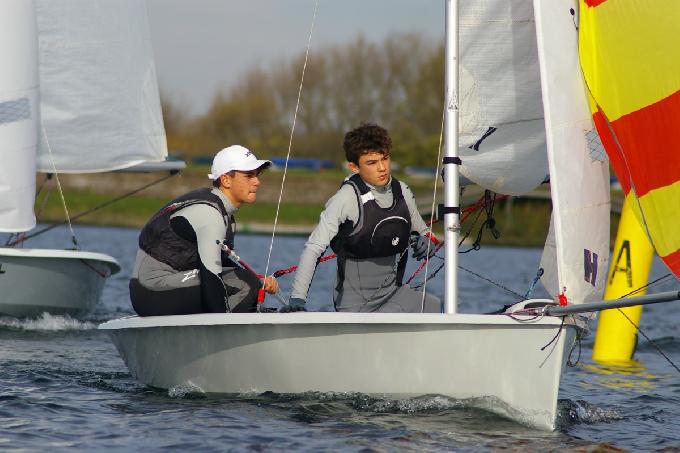 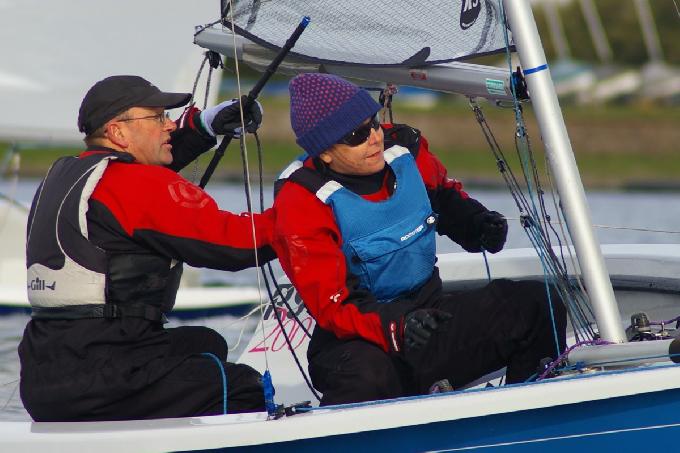 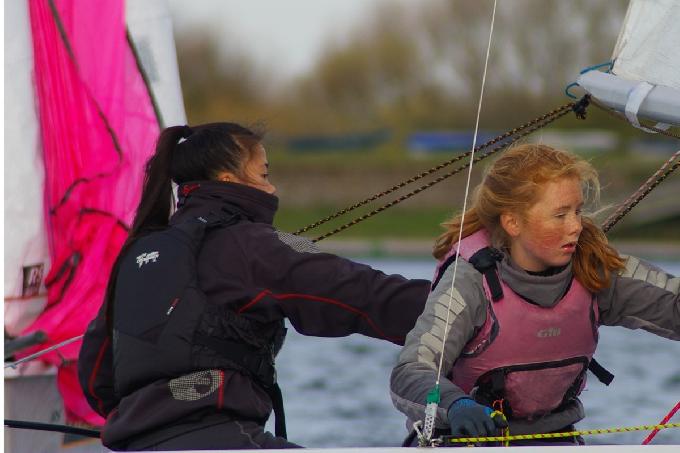 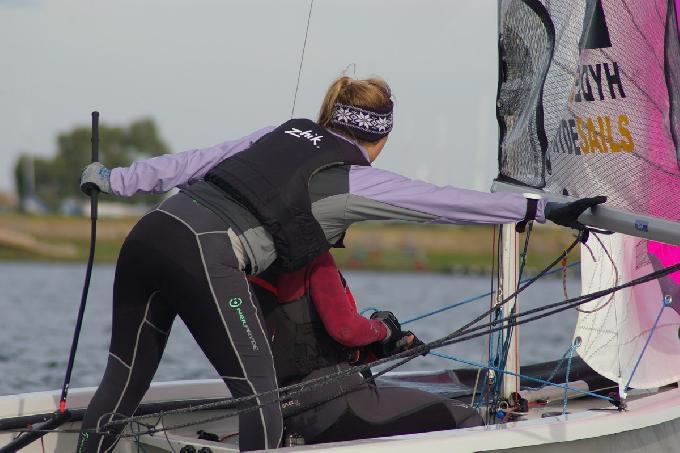 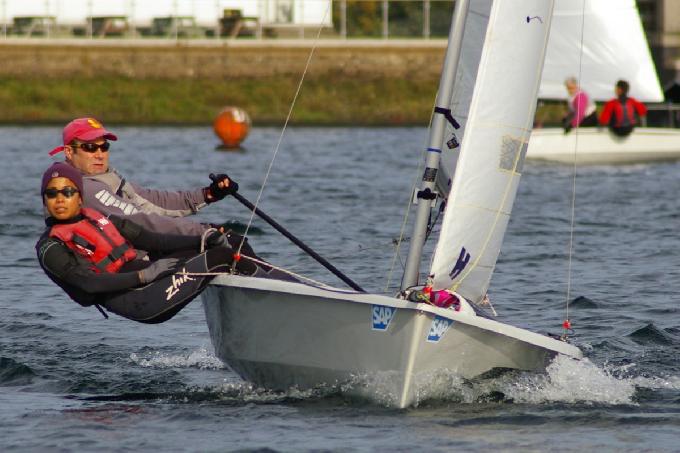 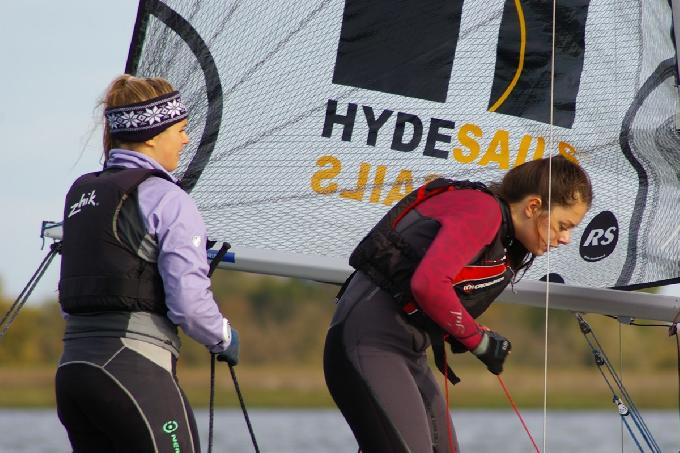 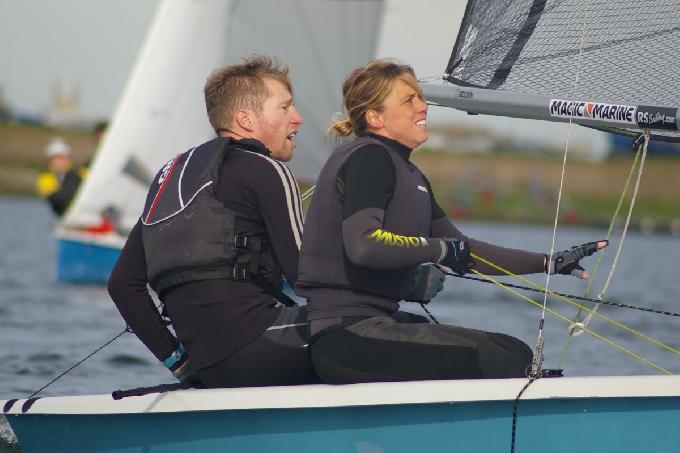 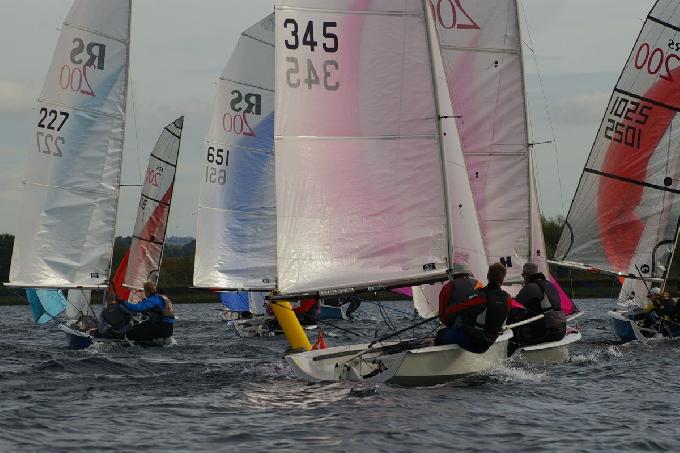 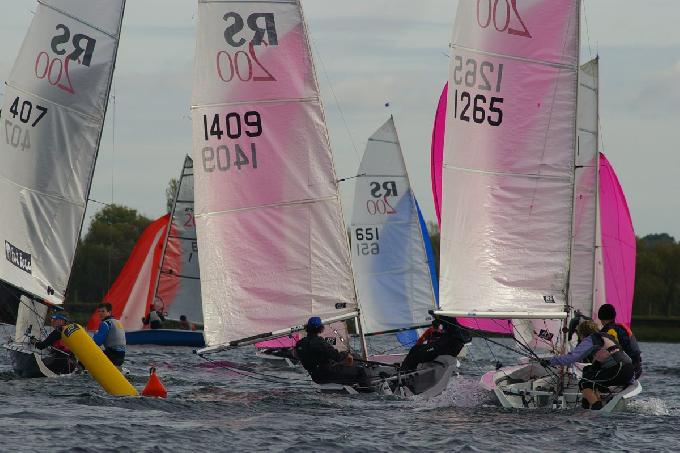