Dear Members and Friends of Members,

I need to thank a lot of people who made yesterday such a great day.
This is a good way of making enemies as there always half a dozen that are forgotten, So apologies to these in advance.

Firstly, all the sailors, both 'mature' and young, particularly those who returned in the afternoon for another 3 races.
I will turn a blind ear to the comments I received when I asked finishers of Race 6 if they wanted a 7th race.
And well done to the Oppie sailors for turning up in force for racing.

Secondly, the caterers, who were amazing , as was the exquisite food they served all day.
The caterers were led, inevitably, by Vice Commodore Uta, who was there for hours the day before to receive the food consignment, cooked all Saturday night, arrived at 8 am on Sunday, worked til the first four minute signal when she jumped into her RS200, exhausted her first helm who ran away at lunchtime, won a trophy with her second helm, helped serve lunch, directed the fantastic barbecue, mothered the under eights in the Pirate Sea Battle, organised the best dessert course ever, danced (at last) for the first time ever (in the writer's experience), and then led, by example, the clearing up which finally got the clubhouse back together by 8 o'clock.

But this was not a one-person effort, by a long, long way.

Tessa Groves, left marooned on land by husband Andy (who was monitoring Roger Federer's every word at Wimbledon) was another key caterer who made dessert on Saturday, kept everything going all day Sunday and also stayed late.
Sasa Marinkov (Mrs Jones to me) was also there, with an engaging parrot on her shoulder, from 8 til 8, with no sailing to break up the non stop food preparation and clearing. Her filo dessert was amazingly good, I am told.
YinPingLeung was another key player in the day long feast. She seemed a little lost not having one of her delicious main courses to cook, but coped
A new Lady in Blue, whose name I've forgotten, was also in the kitchen the whole Day, never stopping.
Kirsten Marley, whose chocolate brownies were quickly taken by the young pirates.
Emma Harris was elsewhere early on, but worked hard on arrival as the early starters needed help.

The barbecue team, led by Rob Pettit, needs a special mention.
Rob's co barbecuers were John Smith, Chris Smith, and Ian Peace (the latter, I think, succumbing to heat exhaustion early on). Manfully setting up their barbecue so they were downwind of the heat and smoke, their appeals for liquid sustenance could be heard the whole afternoon. Though parched and blackened by smoke, they provided the best barbecue in memory. Thank you.

And thank you to all others who helped the catering by providing food, clearing up and keeping things going.

The duty team on the water was small but did a great job. CJ and Micky assisted me on the Committee boat, Mike Wong and Martin Lown, adjusted all 5 marks, did rescue and coached the Toppers all day long.
Thank you Ray Lambe for organising the morning Oppie racing, helped by Dylan Emmett. I need the results of these.

Jim Champ, gets a very special mention. If ever the racing format needed a computer, it was today, as I had asked for the individual results to be in PY, and the Team Results to be in Personal Handicap.
The club computer was nowhere to be found in the morning, panic solved everything, a computer turned up at lunch time, and Jim with a little help from Gareth Griffiths, completed a full set of results by Prize giving.

My two co- Pirate Ship captains, Brendan O'Leary and Dylan Emmett should be congratulated for managing to avoid any collision while being drenched by reservoir water and experiencing the most piercing screams outside of Non Such Girls High School. Brendan managed the swamping of his Plastimo with calm typical Australo/Irish resolve.
Thank you to whoever rigged the pirate ships, and de-rigged them and put the the rigs away. I know Dylan was one.

And thank you to all others that dived in and helped. Rob Wall and Alexis Villiers were two and doubtless there were many more.

But what of the sailing?
Full individual results are on the club web. Thank you Jim:
Team results
Individual Results 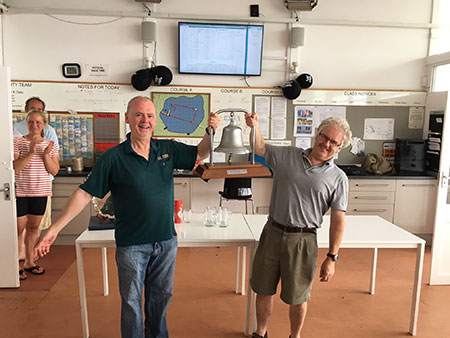 I will add the Oppie Results when I receive them.

A Good Commodores Day. Thanks again to all participants, helpers, parents, family and guests

And some pirate battles: