Here's a link to the ISAF Study version of the RRS from 2017.

Basically this is an anotated version of the new rule book, with all the changes highlighted, and hyperlinks to a copy of the original proposal for the change, which includes the reasoning behind the change. 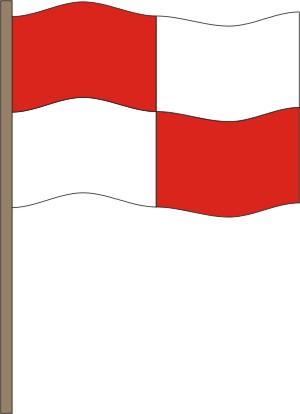 This is a U flag. You need to know this one, because the U flag is a new alternative to the black flag - see rule 30.3

There is a lot of procedural material about conduct of hearings and the like, and also about bringing in a new category of "Support Person" (parents, this means you!) who is subject to the rules.

As I said before, for all of us there are detail changes around rule 18 (mark roundings), as indeed there usually are. Its a ferociously difficult area to write rules for. We should all make an effort to study rule 18 and make sure we understand how it currently works, as opposed to how it worked when we were 18...

18.2 has a new clause, which I think is mainly about when you stop being entitled to mark room, and is clarification. 18.3, tacking in the zone, has been changed so it only applies at port hand rounding marks. This is a smaller change than you might think.

19 (Room for Obstruction) has a bit of clarification about overlaps and marks.

20 (Room to tack) has been rewritten for clarity, but with much the same meaning.

21 (Exoneration) has had some housekeeping. If you're not familiar with this you should be. Its a relatively new concept in the rules, covering, roughly speaking, what happens when someone forces you to break a rule.

22.3 (Backing a sail) now applies to a boat moving sideways (on the startline probably) by backing a sail. This will affect some of the more arcane start line tactics, but is I think an improvement.

24.2 interfering with another boat rewritten. Now "if reasonably possible".

30.3 New "U flag" rule. This is a variation on the black flag which doesn't carry over to successive starts. I think we should consider this rather than black flag for Open events, because it means less work for the RC. Flag "U" is red and white squares.

32.1. and 32.2 (Shortening and abandoning) have some changes that are mainly housekeeping.

The other changes are of less immediate interest I think.